"The national leadership is a murderous sociopath" 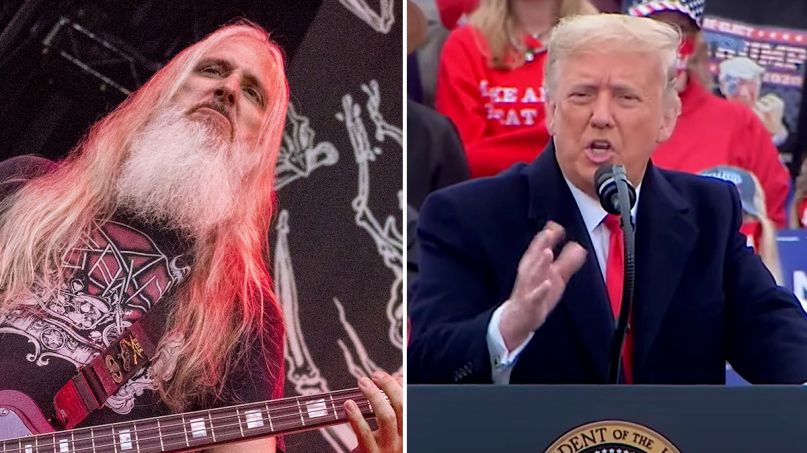 Lamb of God bassist John Campbell has choice words regarding Donald Trump’s actions during the COVID-19 pandemic. When asked about the state of the country in a new interview, Campbell said that the president is “murdering people.”

Campbell is specifically referring to Trump’s seeming neglect for COVID-19 precautions and the apparent lack of social distancing that take place at his campaign rallies. Meanwhile, Lamb of God — like many bands — have been forced to play virtual shows and livestreams out of public safety, as the live music industry remains in hibernation.

“We’re f**ked,” Campbell told FaceCulture. “The national leadership is a murderous sociopath. And it’s, I think, glaringly obvious, when you know that there’s a deadly virus going around, yet you have rallies where you bring people together in a closed area.”

He continued, “The reason that we [did] these online performances [last month] is because it would be irresponsible to gather people like that. So we’re trying to push forward as best we can, whereas the president of the f**king country is killing people; he’s murdering people.”

The Lamb of God camp have been outspoken critics of Trump and his policies in the past. Guitarist Mark Morton has repeatedly blasted Trump on Twitter for downplaying COVID-19. And politically minded singer Randy Blythe wasn’t hesitant to call Trump a “f**king idiot” earlier this year in a conversation with Heavy Consequence.

“Before he ever got elected, people would ask me in the press, ‘What do you think about Trump being president?’ And [I would say], ‘The man’s a f**king idiot, and he’s a criminal,'” Blythe told us. “All you have to do is research his real estate dealings in New York City; it’s a matter of public f**king record. … But I think he’s just a symptom of a larger sociological problem.”

Lamb of God released their acclaimed self-titled album amidst the pandemic, and without the ability to tour, have found other ways to promote the new record. In addition to the aforementioned livestreams, the band teamed up with Nightflyer Roastworks for the new small batch “Memento Mori” coffee, which guitarist and roasting connoisseur Willie Adler broke down for us in our recent interview.

Watch Campbell’s full interview with FaceCulture below, followed by our own conversation with Randy Blythe.