Following in the footsteps of Nathan Apodaca, Mick Fleetwood, and Stevie Nicks 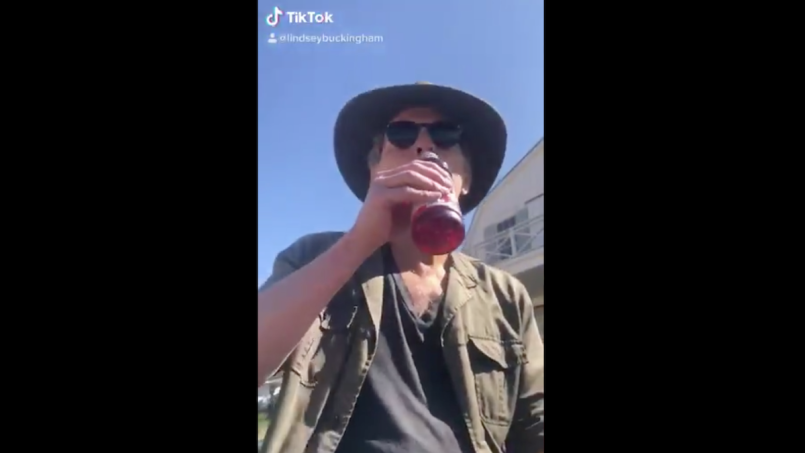 Like cranberry juice, the “Dreams” TikTok challenge started out sweet and then quickly ran its course. Former Fleetwood Mac guitarist Lindsey Buckingham is the latest to hop on the bandwagon, sharing a 15-second video on social media.

The trend was started by the slick skateboarding of Nathan Apodaca, who later received a truck full of cranberry juice from Ocean Spray for his trouble. It got new life when Mick Fleetwood joined TikTok to recreate Apodaca’s video, and then Stevie Nicks laced up her skates to get in on the fun. All the attention pushed “Dreams” onto the Billboard Hot 100 chart for the first time since 1977, while making Rumors a top-ten album.

In announcing his own video, Buckingham wrote that he, “Made this with my girls this weekend.” The clip opens on a close-up of Ocean Spray, pans out to show that Buckingham is the one drinking it, and then pans out even further to reveal the rocker is seated on a horse. Granted, horses are objectively awesome. But this whole bit has been so overdone that when Nicks sings, with “Now here you go again,” it’s hard not to roll your eyes along with her. Check out the video below.

Last year, Lindsey Buckingham had emergency open heart surgery, and fortunately he seems to have made a full recovery. In August, he performed live for the first time since his operation. He even found time to collaborate with The Killers on “Caution”.

Made this with my girls this weekend pic.twitter.com/tCY8DpBoCL