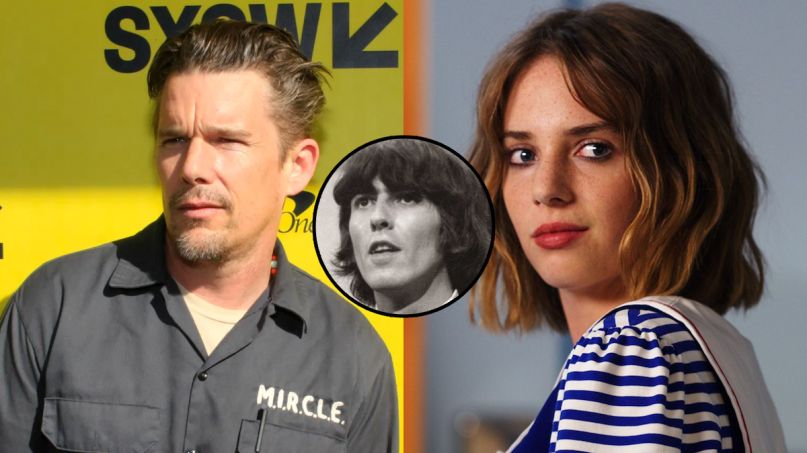 Maya and Ethan Hawke are joining the lineage of parent-child acting teams who share the screen. The daughter-father duo will headline the new movie Revolver, which is a fictional story centered around the very real incident of The Beatles making an unplanned stop in Anchorage, Alaska.

On June 27th, 1966, The Beatles’ plane indeed landed in Anchorage, though there’s conflicting reports regarding why. Some say their flight got held up by a typhoon named Kit, but others claim it was a refueling stop that was delayed due to mechanical issues. When the Fab Four were forced to charter a bus to the nearby Anchorage Westward Hotel (now a Hilton), some Beatlemanics caught wind. Within hours, there were some 500 fans crowded outside the hotel. The whole ordeal lasted barely 12 hours, with The Beatles taking off for Japan at 1:00 a.m.

And that’s it, that’s the whole story. The band themselves seemed bored out of their gourds the whole time, and surely the midnight sun put a damper on any hopes of a nap.

Revolver isn’t about the band, however. Coming from writer Kate Trefry (Stranger Things) and director Andrew Stanton (Finding Nemo and Finding Dory), the movie focuses on Maya Hawke’s teenaged character. When she hears the Beatles are in town, she makes a plan to lose her virginity to George Harrison. So yeah, Ethan Hawke is playing the father of his real-life daughter’s character whose whole motivation is to get laid. This should be a romp.

Variety notes that the character will end up “discovering that adventure (and romance) are actually a little closer to home than she thought,” so it seems her mission won’t succeed. Still, it’s a fun little set up, and the Hawkes are both extremely talented, so we’ll be keeping an eye on this one.