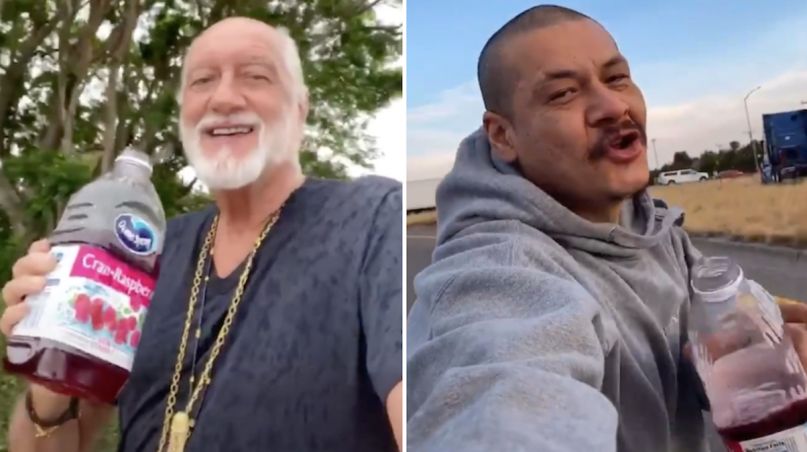 In the midst of one of the craziest, darkest weeks in a crazy, dark year, a viral TikTok video brought joy to the world. User @420doggface208, aka Nathan Apodaca, became an overnight star simply by posting a clip of himself skateboarding and drinking Ocean Spray Cran-Raspberry juice while singing along to Fleetwood Mac’s “Dreams”. Now, the band’s own Mick Fleetwood has launched his own TikTok account — just to pay tribute to Apodaca’s video.

The legendary musician posted his own version of the clip, in which he rolls along (it seems he’s being pulled somehow) and sips from a full bottle of Ocean Spray. Making his lip-synching to his bandmate Stevie Nicks’ lyrics even sweeter is that there appears to be a light drizzle coming down. Even on such a gray day, there is something so blissfully pure about this combination of gliding, cran-ras, and “Dreams”.

Fleetwood Mac previously tweeted their appreciation for Apodaca’s video, but Mick’s new clip is perhaps a more proper thanks. After all, the original proved a huge boon for “Dreams”, which saw a massive374% bump in download sales in the days and 88.7% increase in streams after the video went viral. Apodaca has reaped plenty of reward himself, as he’s received over $10,000 in donations.