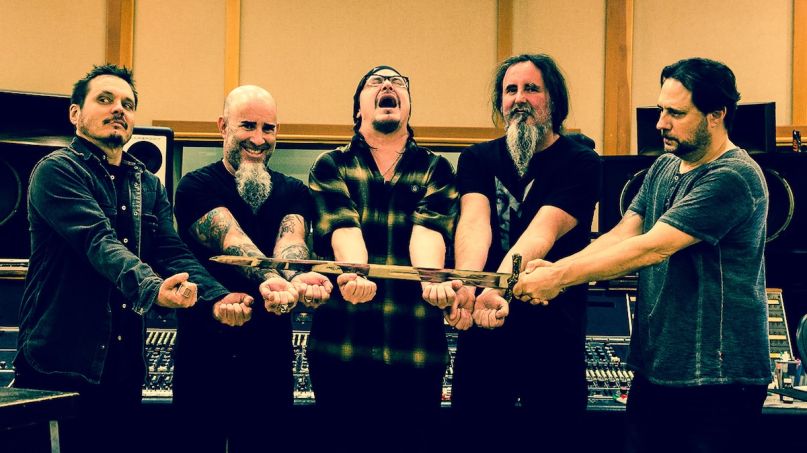 Prior to the pandemic, Mike Patton had countless irons in the musical fire. While his touring plans came to a standstill, the singer has soldiered on with his many creative endeavors. One of those projects is the first album in 21 years from his reunited band Mr. Bungle.

Mr. Bungle reunited earlier this year for a handful of shows in February, featuring a lineup that included original members Patton, Trey Spruance, and Trevor Dunn, along with thrash titans Dave Lombardo (ex-Slayer, Suicidal Tendencies) and Scott Ian (Anthrax). In addition to the concerts, news came that the same lineup would re-record Mr. Bungle’s 1986 demo The Raging Wrath of the Easter Bunny.

The re-recording, due October 30th, features the songs from original tracklist, plus a couple of never-before-recorded tunes, and a cover of S.O.D’s “Speak English or Die” reworked as “Speak Spanish or Die”.

In celebration of the release of The Raging Wrath of the Easter Bunny Demo, Mr. Bungle are set to stream a virtual Halloween concert beginning at 3 p.m. ET on October 31st. The show, dubbed “The Night They Came Home”,  promises a number of surprises.

In advance of both the Mr. Bungle album and streaming event, Mike Patton checked in with Heavy Consequence to talk about reuniting Mr. Bungle, his life during the pandemic, the latest on his other bands, and the future of the concert industry. Read our interview with the acclaimed singer below.

On the genesis of the Mr. Bungle reunion, particularly adding Dave Lombardo and Scott Ian to the lineup

Mike Patton: It’s not really easy to pinpoint, but I would say that for a while Trevor and me and Trey had been close again. We’d always joke, like, “Hey, if we did a reunion, what would we do?” And most bands, you know what they’d do — they would put together the classic lineup and play the f**kin’ hits? Unfortunately, we don’t have any hits. So, for us it was very easy. I think it was Trevor’s idea. He was like, “Why don’t we play the metal stuff with Lombardo?” And I was like, “F**k!” — like I could hear it when he said it. But there was no plan — it was just an idea, and sometimes ideas grow roots, and then all of a sudden you’ve got a f**king tree in your f**king house. Like, “Oh shit, what do I do with this?” So, Dave was into it. I sent him the demo. or maybe Trevor did … I can’t remember. And, of course, that demo, I don’t even have the cassette, so we had to send him a f**king YouTube link.

After he listened to it, he said, “I can’t really tell what the drums are doing.” I’m like, “That’s why we want to re-record this. We want to do it right, so you can actually hear stuff.” The way we recorded that thing, the first thing we ever recorded basically, it was on a little four-track and Trey did a great job, but it still sounds like it’s coming out of a vacuum cleaner.

And then I remember thinking, “Okay, we got something, man.” And listening back, that demo is pretty much a guitar record. It’s really about guitars. And so one thought that came to my mind was like, “Trey, would you mind, but I think we need another guitar player — to handle shit when you are soloing and whatnot.” And he goes, “Yeah, f**king great idea,” and he’s like, “Who?”

And we had a couple ideas, but Scott was one of the ones that made the most sense from a musical standpoint. He and Dave were the dudes who influenced this music in the f**king first place — like it wouldn’t have happened without them. Scott was so f**king funny — I hit him up and I’m like, “Hey man, you want to play guitar in this next Bungle thing?” I don’t think he understood. I think he thought, “Hey, do you want to come to a show?” And I’m like, “No, no, no, do you want to be in the band?” And he’ll even tell you that he was freaked out. I was like, “Why? Us?” We always consider ourselves a small-town band, and this record is a testament to that, but we went to the source — we went literally went to the well here and got the greatest guys that we thought would realize the music, and we’re f**king lucky to have them.

On whether Mr. Bungle were concerned about alienating their ’90s fans by focusing on their ’80s hardcore music for this reunion

MP: No, we never thought about that. It was just like, “This is what we’re going to do, and this is the way we’re going to do it.” And if we do it convincingly and really well, it’s gonna hold its water. But yeah, there’s been blowback for sure. Like, “Why didn’t you play this song or that song?” Some people just don’t get it.

On the song “Eracist”, which was written around the same time as the demo but never properly recorded at the time

MP: Thank God for Trey’s memory. I wrote the f**king song, and Trey came to me and he was like, “Hey, remember this riff?” And he sent me some stuff and I’m like, “Oh my God, what is that? Is that ‘Skinhead’?” We used to call it “Skinhead”. So he sent it to me, and I was like, “Holy f**k, there’s a song here.” So we kind had to reconstruct a broken memory of it. But thank God for Trey, otherwise I would’ve complete forgotten about it.

On whether there was political motivation in reworking S.O.D.’s “Speak English or Die” as “Speak Spanish or Die”

MP: That came about as we wanted to do an S.O.D. song. And we kind of talked about which one, and everybody kind of agreed that would be a really good one to do. I love the political un-correctness of it, but I was like, I speak Spanish, so why don’t we do it in Spanish, the whole f**king thing. And Scott [who was a member of S.O.D.] was like, “Dude, you do whatever the f**k you want, but if you do it in Spanish, that’s f**king amazing.” And I didn’t do the whole song in Spanish, but I think the intent is there. So, maybe that’s a little political, I don’t know. We are not a New York hardcore band. We don’t have those standards. Those guys had it in those days, even though, as Scott told me, they were joking around and stuff. I felt a kinship with him and he gave me the license to mess up his song.

On the chances of this lineup of Mr. Bungle writing and recording an album of entirely new songs

MP: You’re getting ahead of the skis there! I don’t know. Look, it could be fun. So I would never say no, but I kinda doubt it. It’s just really like a moment in time and we’re documenting a sound that we had that really most people don’t understand. It illustrates basically where we came from, and I don’t know if we could do that twice.

On how the pandemic has affected him personally and professionally

MP: Great question, man. That’s like a human question. When this stuff started, all I can think about is basically we were so lucky to do those Bungle shows when we did them in late February. I just felt lucky that we got those in. During the [pandemic], I had to cancel a year’s worth of shows. I was scheduled to be with Faith No More, doing a lot of different stuff on different continents. So, I took the pandemic as an opportunity … I like being at home and I’m not really a social guy anyway. So f**k it, I’ll stay home and make music. No big deal. So the first three months were like gold. I was totally working every day and during the pandemic I’ve worked on three or four different records. So to me, it wasn’t that much different than my norm. However, after like three months, I was like, “F**k this shit, this is getting old. Come on, I gotta go to a f**king restaurant.” And it became a little more laborious.

In San Francisco, where I’m at, some things are kind of open, some things are not. You don’t really understand the protocol and whatnot. It’s coming to that realization that you can’t get what you want when you want it. I think moving forward, during the pandemic — and there’s no end in sight, let’s be honest … let’s not listen to Trump — there’s no end in sight so this is the way we’re going to live for now. So it’s on me to figure out how do I adjust, and not just close myself up and isolate. I can’t do that.

MP: Tomahawk is done, and Dead Cross is in process.

MP: I’m not a scientist, my friend. What I would say is two words: “Doctor Fauci.” I ain’t doing shit and nobody’s going to do shit until we know it’s safe. Not just for us, but for everybody. Right now, a public gathering, which a concert really is, is not a good f**king idea. It’s not a good idea, and most of us keep that in mind. I’m not trying to push the envelope here. It’s not going to happen. So what we’ll do is basically wait until we’re told what we need can do. It’s f**king simple. Be safe, be cool. A lot of people and a lot of musicians don’t get that. But we’re not gonna play until we know for a f**king fact that it’s safe to do so.

On what fans can expect from Mr. Bungle’s streaming Halloween show?

MP: I have no f**king clue. I hope it’s not going to be awkward, because here we are playing in front of nobody and we gotta act like we’re playing in front of somebody. We thought it was a good idea. It’s a pain in the ass just to organize it and figure out how to deal with different technical aspects of it, and it’s far beyond my pay grade. So I’m really psyched that we were able to make it happen. Hopefully, it’ll go off without a glitch. But, hey, what other choice do we have?

Our thanks to Mike Patton for taking the time to chat with us. Pick up Mr. Bungle’s new album, The Raging Wrath of the Easter Bunny Demo, here, and purchase tickets to the band’s virtual Halloween show here.