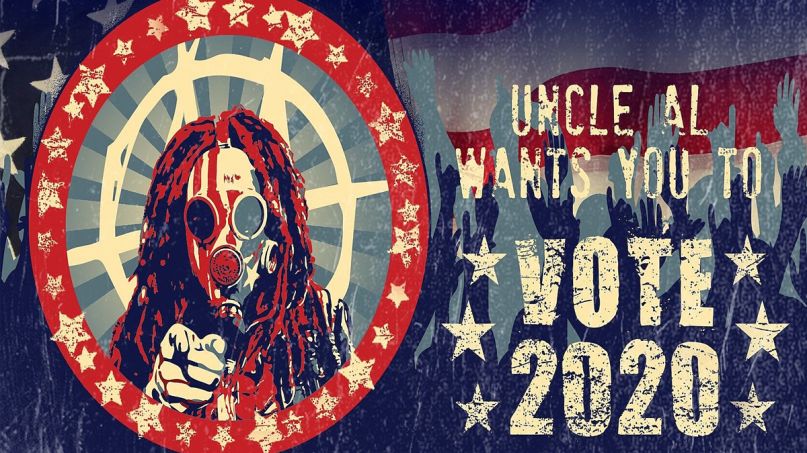 Ministry frontman Al Jourgensen has been an outspoken critic of the status quo in U.S. politics, as evidenced by the band’s politically charged 2018 album AmeriKKKant. Now, the band is encouraging its fans to vote in this upcoming election with a new lyric video for the 2012 song, “Git Up, Get Out ‘N Vote”.

The track first appeared on Ministry’s 2012’s album, Relapse, gaining some notoriety for its outright direct message of encouraging people to vote. Atypical subject matter for most metal bands, but right in the wheelhouse for Jourgensen and company.

Ministry first started its 2020 voting campaign back in July, enabling fans register to vote through the band’s website and other means. The band also created a 30-song “Soundtrack to Your Election” Spotify playlist to raise voter awareness and “get fans engaged in the upcoming voting season.” Tracks vary from Ministry’s own AmeriKKKant selections to political songs by Public Enemy and Rage Against the Machine. With the election looming, the band has re-promoted the playlist.

When Jourgensen spoke with Heavy Consequence in late 2018, he told us that it’s important for voters to educate themselves before hitting the polls on Election Day. “It doesn’t matter what the f**k Kanye [West] or Taylor Swift or any other celebrity says — or me, for that f**king matter,” exclaimed Jourgensen. “People need to start doing their own f**king homework.”

According to a press release, fans can also expect surprises on the band’s social media on the next two Tuesdays leading up to Election Day. Meanwhile, Ministry are currently working on their 15th studio album, which will eventually be released via Nuclear Blast Records. The first single, “Alert Level”, arrived in April.

Watch the video for “Git Up, Get Out ‘N Vote” and stream the “Soundtrack to Your Election” playlist below.