Musicians and Celebrities React to Death of Eddie Van Halen 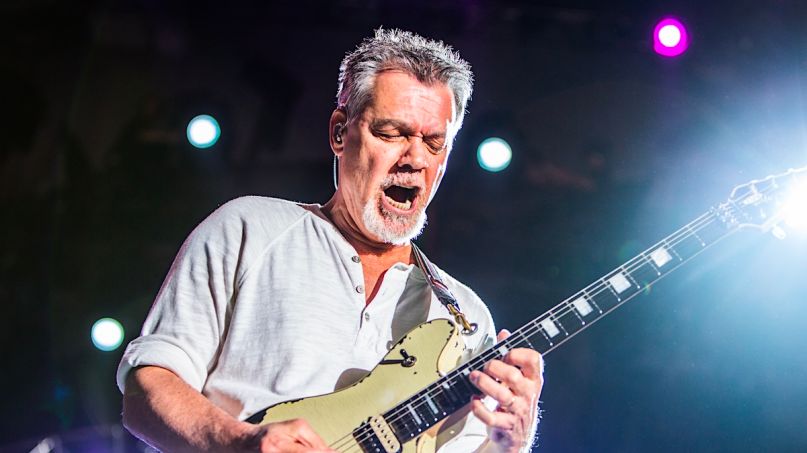 Tragically, news broke earlier today that the legendary Eddie Van Halen has died at age 65 following a long battle with throat cancer. Needless to say, the rock world and beyond has been devastated by the iconic musician’s passing.

The Van Halen guitarist’s playing influenced countless musicians over the past 40-plus years. The Rock & Roll Hall of Famer revolutionized the way the instrument was played with his lightning quick fingers, as evidenced on the instrumental classic “Eruption”.

Along with David Lee Roth, Michael Anthony, and his brother Alex, Eddie Van Halen dominated rock music with Van Halen. Beginning with their 1978 self-titled debut, they came out swinging, quickly becoming multi-platinum superstars. They continued to achieve massive success with Sammy Hagar as their singer, and welcomed back David Lee Roth for a triumphant tour in 2006. Following their 2012 album A Different Kind of Truth, they went on hiatus in 2015. Eddie and his unmatched guitar skills were some of the few constants in the band throughout their career.

Since news of Eddie Van Halen’s death was announced, tributes have been pouring in from fellow musicians via social media. David Lee Roth, Sammy Hagar, Michael Anthony, Wolfgang Van Halen, and members of Led Zeppelin, AC/DC, KISS, Black Sabbath, Metallica, Aerosmith, Pearl Jam, Rage Against the Machine, Queen, and so many more rock peers have expressed their condolences, as have celebrities like Jimmy Kimmel, Mark Hammill, Patton Oswalt, and others.

See a collection of social media reactions to Eddie Van Halen’s passing below. Statements from past and present Van Halen members are collected here, while tributes from fellow guitar legends can be found here.

What a Long Great Trip It’s Been.. pic.twitter.com/M5pmkVi7hW

Heartbroken and speechless. My love to the family. pic.twitter.com/MQMueMF2XO

We are enormously saddened to hear about the untimely passing of Eddie Van Halen. We considered him an inspiration, an idol, and after spending a summer together on the road in '88, a friend. Sending love to Alex, @wolfvanhalen & everyone in the greater VH family.

I’m just devastated to hear the news of the passing of my dear friend Eddie Van Halen. He fought a long and hard battle with his cancer right to the very end. Eddie was one of a very special kind of person, a really great friend. Rest In Peace my dear friend till we meet again. pic.twitter.com/Qs8tsLPANJ

Whether you were blessed to have known him or not, He was a kind and gentle soul… His impact on ALL our lives was immeasurable! His music, eternal! My deepest sympathies to the Van Halen family… Love you Ed #LongLiveTheKing!

. @EddieVanHalen was one of the nicest guys I ever worked with and we shared so many laughs together.   His influence on music and especially the guitar has been immeasurable.  He was an absolute legend.  Eddie, I’ll see you on the other side, my friend.  Love, Ozzy.

HE CHANGED THE COURSE OF GUITAR WHAMMY BAR ROCK & RHYME… A GAME CHANGER… AND HIS MELODIC CRAZY WAS OVER THE TOP… WE’LL MISS YOU EDDIE…
LOVE FROM ABOVE
ST pic.twitter.com/ByiJBk2KfR

https://t.co/QjAj45KED8 Apex talent. An unparalleled titan in the annals of rock n roll. One of the greatest musicians in the history of mankind. Rest In Peace, King Edward

Rest In Peace @eddievanhalen You will be missed! #Legend pic.twitter.com/A2dpG41dbS

Sad to hear Eddie Van Halen has passed away. A guitar innovator with a fierce spirit of musical and technical exploration. Prayers and thoughts with his family and friends. pic.twitter.com/TI4ipeIXbR

RIP Eddie Van Halen. Van Halen were a tremendous influence on both Vinnie & Dime & Pantera. Hopefully they are all rocking out together now! pic.twitter.com/XtnL33aGsd

Oh NO! Speechless. A trailblazer and someone who always gave everything to his music. A good soul. I remember first seeing him playing at the Starwood in 1976 and he WAS Eddie Van Halen. So shocked and sad. My condolences to Wolfie and the family. https://t.co/ExAWzFAEYJ

My heart is broken. Eddie was not only a Guitar God, but a genuinely beautiful soul. Rest in peace, Eddie! …Eddie Van Halen Dead at 65 from Cancer https://t.co/gITtcndQVv

So sorry for your tragic loss @WolfVanHalen, but take solace in knowing that he will be long remembered and live on forever as one of Rock's most extraordinary guitar virtuosos. Condolences to you, Valerie @Wolfiesmom and the entire Van Halen family.#RIPEdward https://t.co/XWoCe8nrZv

Two of the best hours of my life were spent chatting with Eddie Van Halen. A great musician, yes – also a funny and lovely guy who will be missed terribly. Sending love to Janie, Wolf, Alex & all those who loved him.

Crushed. So fucking crushed. RIP Eddie Van Halen. You changed our world. You were the Mozart of rock guitar. Travel safe rockstar.

We're saddened to hear of Eddie Van Halen's untimely passing today. Given the news today, we want to dedicate our album Van Weezer to Eddie as a thank you for all the incredible music that soundtracked our youth and inspired the record. RIP EVH. pic.twitter.com/plb9WIuo64

Just when I thought 2020 couldn't get any worse, I hear Eddie Van Halen has passed. So shocking- One of the nicest, down to Earth men I have ever met and toured with. A true gent and true genius. RIP. So sad.Thoughts go out to his brother Alex, and his family. pic.twitter.com/fwIw040YMX

These videos made me so happy growing up. Cool dudes.. pretty girls.. amazing music.. it made me feel alive. I can’t thank Eddie Van Halen enough for all the incredible music. Wow. Sad day but this music and the memories are making me smile. pic.twitter.com/b0PmLBuqJV

I am in complete and utter shock over the news of Edward Van Halen’s passing…Very few musicians ever come along that change the entire landscape of their instrument and King Edward was one of those few. One of the G.O.A.T! #RIPEVH #RIPEdwardVanHalen 😢😢😢 pic.twitter.com/1uuMLt1cvv

HE LOVED THE WRESTLING. EDDIE VAN HALEN IT BREAK MY HEART YOU HAVE SO MUCH TALENT AND YOU HELP TO MAKE THE ROCK AND ROLL I MISS YOU FOREVER #RIPEDDYVANHALEN pic.twitter.com/1jJHGtGtHc

Just when I thought 2020 couldn't get any worse, I hear Eddie Van Halen has passed. So shocking- One of the nicest, down to Earth men I have ever met and toured with. A true gent and true genius. RIP. So sad.Thoughts go out to his brother Alex, and his family. pic.twitter.com/fwIw040YMX

“So saddened to hear of Eddie Van Halen’s passing. I stood in awe and complete wonderment of Eddie’s immense talent and amazing guitar ability. One of the greatest rockers ever and I will miss him.”
-John Fogerty pic.twitter.com/TjdduUSlhL

The world lost an icon, innovator, showman, virtuoso, master songwriter and perhaps one of the biggest inspirations ever to learn how to play guitar. Heartbroken to hear of Eddie Van Halen’s passing. Our love, condolences and best wishes to his his family, friends and fans. #RIP pic.twitter.com/pGhPUXRzyb

Super sad to hear about the passing of Eddie Van Halen. He was a big influence on Chris & me as we were writing Bill & Ted. In fact, when director Stephen Herek was reading the script he got 3 pages in, stopped, put on 1984 & resumed. We wanted the movie to be a cinematic “Jump.” pic.twitter.com/B2oTnDMWdH

Van Halen was popular when I was a teenager but it took until I was older & a more educated musician to understand just how astoundingly good Eddie Van Halen was. One of the greatest musicians ever recorded.
He changed the way music is played & heard.
And he rocked.
Rock on & on. pic.twitter.com/Ce9Klj9gcF

Oh man, I just heard about Eddie. Fucking hell. I hope Wolfgang and Alex and the rest of his family are doing OK. The greatest of all time has left the building. RIP EVH.

I am devastated at the news of the passing of my friend Eddie Van Halen. pic.twitter.com/hUyIdKXsdG

I just heard about Eddie Van Halen and I feel terrible about it. Eddie was such a great guitarist and I remember how big Van Halen was, especially here in L.A. Love and Mercy to Eddie’s family & friends. pic.twitter.com/PY8fyrx1Lu

This one sucks big time!!!!! R.I.P. Eddie Van Halen!!!! You took what Hendrix gave us, and created an even bigger legacy!!!! You will be sorely missed, and I’m glad to have met you and hung out together!!!!! Can 2020 just go the fuck away!!!! pic.twitter.com/SaCyhXEaz4

We lost one the all time greats RIP Eddie Van Halen pic.twitter.com/BeTSaNW0UC

Of all the guitarists I got to play with, he was my favorite. RIP Eddie Van Halen

Yesterday @amandashires and I were singing our heavy song and cameras were rolling and I could tell she was feeling some emotions, so I very poorly played a little bit of Eruption to make her smile and it worked. No musician ever brought me more joy than #EddieVanHalen. Grateful.

Oh man, bless his beautiful creative heart. I love you Eddie Van Halen, an LA boy, a true rocker. I hope you jam with Jimi tonight. Break through to the other side my brother. ❤️❤️❤️ https://t.co/XpcTlPJq9A

So sad to hear this https://t.co/pawDmmLYCE

It cannot be overstated how much Eddie Van Halen contributed to rock music and rock guitar. He changed the World! #RipEVH

RIP Eddie Van Halen. A guitarist so brilliant that Wyld Stallyns couldn't even conceive of an existence without without him first joining the band. pic.twitter.com/ogq3GvgCUS

One of the greatest rock guitarists of our time – Eddie's influence on music will live on forever. My thoughts and condolences are with Eddie’s family, bandmates, and fans #RIPEddieVanHalen pic.twitter.com/sED8qSsI98

Eddie Van Halen was an inspiration and a legend in the world of rock and far beyond. A true innovator. We are heartbroken to hear of his passing. His music will live on forever! https://t.co/1MBsJ6SkuN

One of the greatest guitarists of all time! Rest in peace Eddie Van Halen pic.twitter.com/T0unvRXYmf

#RIPEddieVanHalen 😢 a guitar god that will never be forgotten!

RIP Eddie Van Halen 😔 His technique, his sound, and his songs changed the shape of music. He was an inspiration to every guitar player taking things to a new level. The music world will never be the same but he leaves a legacy that will live forever. #RIPEddieVanHalen pic.twitter.com/RreXXy5PvP

It is with great sadness that I heard the passing of Eddie Van Halen. ⁣ ⁣ He was the real deal: he pioneered a dazzling technique on guitar with taste and panache that I felt always placed him above his imitators. ⁣ ⁣ It was good to see him featured at the Met’s Play It Loud Exhibition.⁣ ⁣ R. I. P. Eddie⁣ ⁣ Photo: Paul Natkin / Getty

No words…Heartbroken, my love to the family💔

Completely gutted to hear the sad news. This wonderful man was way too young to be taken. What a talent – what a legacy – probably the most original and dazzling rock guitarist in History. I think of him as a boy – an innocent prodigy – always full of joy, always modest – and those truly magical fingers opened a door to a new kind of playing. I treasure the moments we shared. His passing leaves a giant hole in my heart. RIP Ed Van Halen. Bri

This is Eddie Van Halen, howling at the stars, combing the stratosphere, howling for the children, the burning fields, then free, flies two-handed, straight into the celestial realm where all is music.