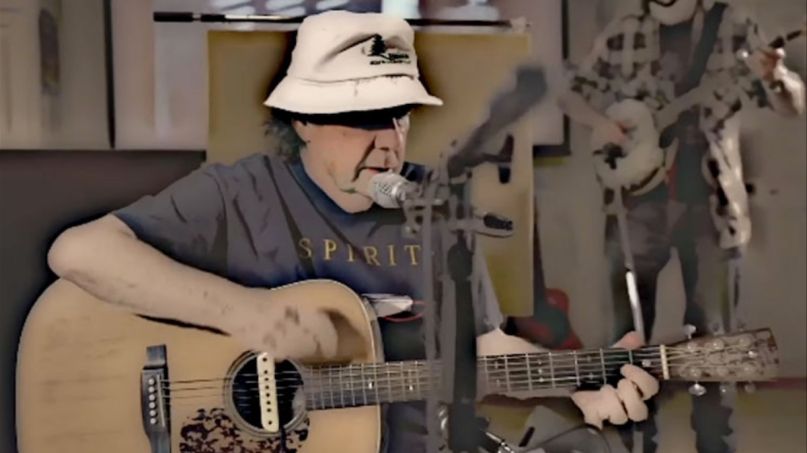 At barely 21 years old, Neil Young released his first album with Buffalo Springfield in 1966 and then, two years later, dropped his self-titled solo debut. Ever since then, the folk rocker has been churning out political anthem after classic rock staple without much pause in between. It’s an equally impressive and intimidating career, but that hasn’t stopped his older brother, Bob Young, from launching a music project of his own at 78 years old.

Bob Young uploaded his debut single today out of nowhere. As Exclaim points out, it’s called “Hey America” and it sees the former professional golfer adopt the moniker Young Bob & the Peterboroughs. The group features Bob Young on lead vocals and guitar, Neil Young on harmonica, Ryan Weber on bass, Melissa Pyne on fiddle, Mike Belitsky on drums, and Travis Good on banjo.

In a statement, Young explained that he didn’t dream of becoming an elderly musician or writing songs of his own. He just happened to be watching Donald Trump on TV and felt compelled to “write down a few lines” that popped into his head. “When I got home, I found I could play those lines on guitar,” he said. “Gradually, it became what it is now. It took a while to be able to play and sing the song from start to finish. When I could finally accomplish that, it was a victory.”

“The recording process all happened at once. I had never done that either,” said Young. “It was a band performance that had spontaneity. In another session, some vocal harmony was added, and Neil played harmonica. My perspective is simultaneously that of a participant and spectator. I am watching myself do this. All you aging baby boomers out there, give it a shot. As Yogi Berra put it, ‘It ain’t over ’til it’s over, and even then it ain’t over.’ I agree. I have more songs, all from the same creative spark.”

“Hey America” comes with a music video directed by Neil Young, Daryl Hannah, and CK Vollick. It features footage of everyone recording the song together in a massive empty room. Like the song itself, it’s straightforward and simple in a truly endearing way. “Hey America, give love a chance,” sings Young. “Every generation has songs to sing/ Let them sing/ Let them sing.” Watch it below.