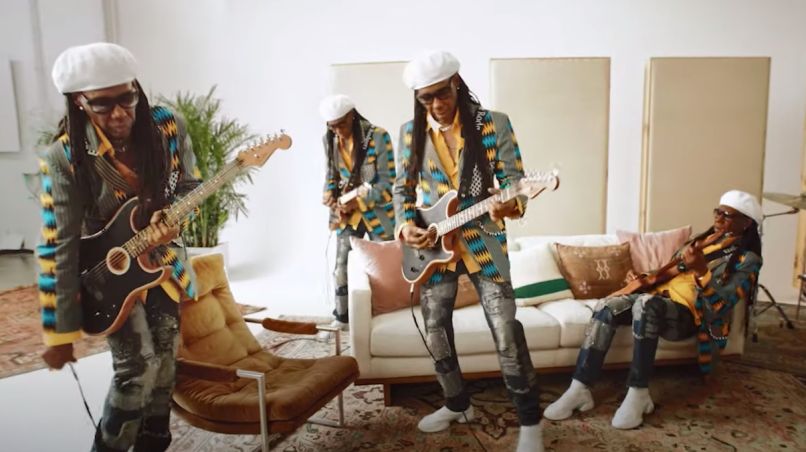 Nile Rodgers has teamed with Fender to show off their innovative Acoustasonic Stratocaster guitar. To demonstrate the instrument’s versatile voice, the CHIC founder has penned a new song called “Inside the Box”.

The Acoustasonic Stratocaster is a hybrid, hollow-body acoustic-electric that’s really like having nearly a dozen guitars in one. It features five base voices, controlled by a blade-selector, and a mod knob that lets you toggle between A and B positions on each setting. What’s more, those 10 voices can be altered even further by rolling the mod knob between A and B, delivering an endless possibility of sounds. It all gets channeled through a trio of pickup systems: a Fishman Under-Saddle Transducer, a Fishman Acoustasonic Enhancer, and Fender’s own Acoustasonic Noiseless magnetic pickup.

On “Inside the Box”, Rodgers plays this multifaceted guitar to its fullest potential. The track is a breezy funk number that sees him working as many of the Acoustasonic’s sounds as he can. He and engineer Russell Graham even broke down which positions can be heard during which parts in the description of the song’s video:

“The voices available on the Acoustasonic are designed to evoke the real-world sources that they are based on (core acoustic, alternate acoustic, electric clean, electric fat, etc.) without traditional guitar amplification…as such, most of the voice indications on this cue sheet are marked ‘no amp.’

HOWEVER, putting the guitar through a traditional guitar amplifier yields interesting and sometimes unexpected tones. In particular, we found that the acoustic/electric blended voice, with traditional guitar amplification applied, was reminiscent of a classic hollow-body jazz guitar – and so for the guitar solo we’ve noted that the tone is ‘AMPED.’”

Watch Rodgers’ playing all the different elements of “Inside the Box” below, followed by the breakdown of the guitar positions. You can also play around with your own Fender Acoustasonic Stratocaster guitar by picking one up here.

If you’re just learning to play guitar, you’re in luck: Fender recently extended its free guitar lessons program through the end of the year.

Below, watch Fender’s own how-to video about the Acoustasonic Telecaster.