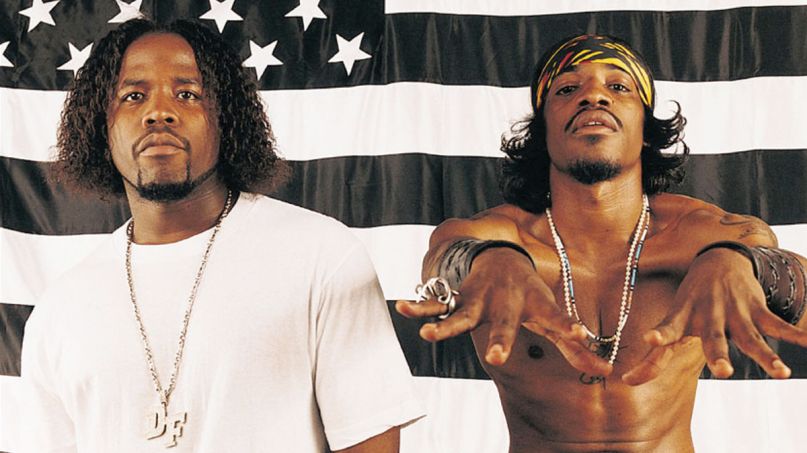 OutKast are celebrating the 20th anniversary of Stankonia in a big way. Legacy Recordings has announced a month-long campaign commemorating the landmark album with a new deluxe reissue, bundled singles, and a Vinyl Me, Please exclusive.

Available digitally in 24-bit and 360 Reality Audio, the newly-expanded reissue arrives October 30th and includes six bonus tracks. Most notably, there’s a remix of “B.O.B. (Bombs Over Baghdad)” from Rage Against the Machine’s Zack de La Rocha, which has never received a proper commercial release. Also included are the Stankonia Remix of “So Fresh, So Clean” featuring Snoop Dogg & Sleepy Brown, the Mr. Drunk Remix of “Ms. Jackson”, and a cappella renditions of those three songs.

Also due out October 30th are each of Stankonia’s singles, available for the first time in their own digital bundles alongside remixes and radio mixes. In particular, the “B.O.B.” bundle features three previously unreleased remixes by de la Rocha, Cutmaster Swiff, and Beat Bullies.

Vinyl Me, Please will also offer Stankonia as its Record of the Month for October 2020. Members will be treated to a collectible 2xLP edition that will come pressed on 12-inch black and white galaxy vinyl and include an art print.

Released on October 31st, 2000, Stankonia debuted at No. 2 on the Billboard 200 chart and sold over 530,000 copies in its first week. At the 2002 Grammys, OutKast would win Best Rap Album and Best Rap Performance by a Duo or Group for “Ms. Jackson”. Today, it’s considered one of the greatest albums of all time by critics and publications around the world.

Pre-orders for the reissues are currently on-going. In anticipation, revisit the duo’s top 10 songs. And if you’re looking for a good laugh, you also could revisit Key & Peele‘s explain why we’ll never see another reunion.