Pallbearer’s Joseph D. Rowland Talks Forgotten Days and the Importance of Releasing Music During the Pandemic

"If all the artists who had impending releases happening this year just decided to hold them, how bleak that would be" 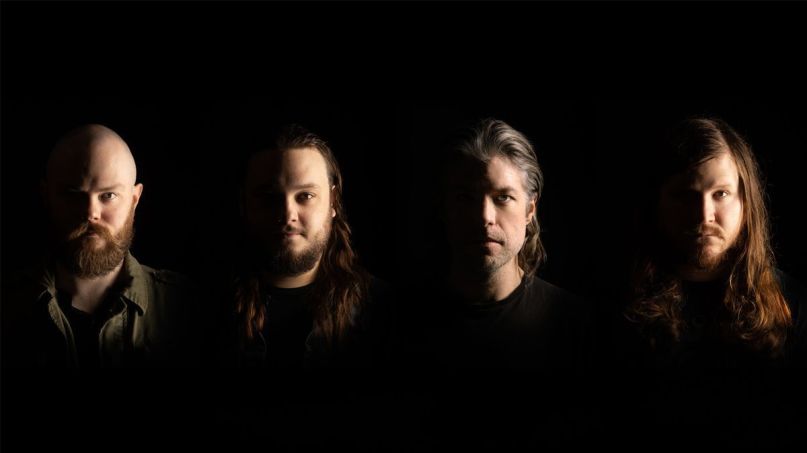 Pallbearer are a true heavy metal success story. Arising from the humble Arkansas metal scene, the band sharpened its craft in the underground and forged its own artistic path, rising up the food chain to become one of the most respected American doom bands. This would eventually lead Pallbearer to heavyweight label Nuclear Blast, who signed the group last year. Symbolically, it signaled that Pallbearer had officially arrived, and that the years of work had paid off.

Like the great doom bands of yore — Candlemass, Solitude Aeturnus, Cathedral — Pallbearer infuse their doom with a palpable emotional weight that verges on spiritual. Good riffs are only part of the equation. It’s the human energy and expression that drives the band’s music and spine-chilling live performances. That energy hits the listener with a full blast. There are few heavy metal bands that can trigger a tear in one audience member and relentless headbanging in another, but that’s the kind of power Pallbearer possess.

Pallbearer’s new album, Forgotten Days (out October 23rd), comes at a turning point in the band’s career. As their first release for Nuclear Blast, the record signals Pallbearer’s entrance into a larger industry. Fortunately, their music was already strong enough to fit snugly alongside the label’s storied catalog. The singles for Forgotten Days have been consistent and steady, seeing the band return to more accessible, riff-centric arrangements. However, the pandemic hampered what-would-have-been massive tour plans for the fresh Nuclear Blast signees. With band members currently isolating in different parts of the country — bassist/songwriter Joseph D. Rowland is in New York City while the rest of the band is in Little Rock, Arkansas — it’s been a less than normal release cycle.

With the release of Forgotten Days approaching, Heavy Consequence caught up with Rowland to discuss the making of the album, Pallbearer’s career growth, and what it’s like operating a major band during the pandemic:

On how the band is holding up during the pandemic

I think everybody is managing to get by. It’s been a pretty wild experience being in New York through all of this. The rest of the guys are in Little Rock, [Arkansas], and I think the pandemic was little bit behind [in getting there]. But everybody’s staying careful and trying to stay sane.

On releasing an album during the pandemic

It’s uncharted territory because we’re so used to being out on the road, especially around a record release. It’s been over a year since we’ve played a show, and we barely played last year because we spent most of the year writing the record. It feels like a completely foreign or alien feeling — for me, at least — knowing that we’re gonna put this [album] out and probably still won’t be able to play it in any real capacity for another year. It’s kinda hard to gauge. Like, what to feel … or how to feel about it. Because it’s more about taking it day by day.

I’ve been mulling over the fact that I am glad we’re still putting the record out and it wasn’t delayed too much. It was supposed to come out earlier this year, but got delayed by some months. I started thinking about if all the artists who had impending releases happening this year just decided to hold them, how bleak that would be. So I’m glad we still have the opportunity to put it out, even if it will be a slow burn of a campaign around the record.

We expanded the palette we’re working with. I’d say, in general, Forgotten Days is a little less maximal than Heartless in terms of how densely composed it is. But I don’t think we’re trying to go back to “simpler times” or something like that. It’s just that we have a broad array of stylistic choices that we made. We wanted to make a record that was more immediate and didn’t take many, many, many listens to digest all the things that we obsessed over in composing it. Akin to a live record almost.

We tracked it in a much more stripped down fashion in comparison to previous records. Foundations of Burden and Heartless both have numerous layers of guitar and all kinds of overdubs that are not really something we’re capable of pulling off in the same way when we’re the four of us are just playing together in the live setting. We wanted to take a stripped down approach that was still massive, but less intensive on the layering.

We worked closely with Randall in the studio. In preparation for it, we told him about the raw approach we wanted to take. And so he dictated the methods in which we would accomplish that. A lot of it came from myself and Mark [Lierly], who plays drums; we’d track live together. Then Brett [Campbell] and Devin [Holt] tracked their guitars live together. It was then put together into one piece with some overdubs on vocals, some guitar solos, and synths. In that regard, Randall’s coaching was a huge component of the record.

On the emotions and catharsis of Pallbearer’s music

That’s one of the cornerstones of the band, having that emotional pull in the songs. The half of this record that I wrote is very direct about dealing with my mom passing away a decade ago and my analysis of that — how I’ve developed and matured as a person with that having happened. It’s a very personal record. In comparison to our past records, there is a way tighter focus on the personal issues, with less hidden things in the lyrics themselves. It took me, personally, a very long time to feel comfortable opening myself up to let other people know how much that affected me.

It was something that I definitely needed to face. Because of when that happened, Pallbearer ended up turning into something much bigger than any of us ever would have envisioned. It’s been like a proverbial whirlwind. It was a convenient way for me to never really take a step back and study how that affected me. It is, to some degree, therapeutic and cathartic to be able to have had the opportunity to make this record concurrently with the idea of taking that inward look and letting go, healing those deep wounds that have been festering inside for all this time.

On the career growth of Pallbearer

When we started the band, it was just because we wanted to play in a band that was more traditionally metal with our buddies in Little Rock. The small metal scene that we had there has a long history of being really badass. We’d already played in other bands, so we wanted to add another one into the fold. Then it turned into something else entirely over the years [laughs].

On the return of live music and its importance to Pallbearer

It’s my hope that as time goes on, that people will swiftly take things more seriously. I’m deeply troubled by the fact that so many people show absolutely zero respect for other people by not doing one very simple thing and having absolute disregard for people’s health and safety. I would hope that as scientific advancements happen and understanding of COVID begins to take further shape, then a combination of people actually having an iota of decency with a very effective treatment and/or a vaccine will put things back on track. I’ve been crossing my fingers really hard that by this time next year, things will be back on track, at least in some places in the world.

As a band, I hope that we can resume that element of our career because I sincerely miss playing live. That’s one of the most crucial things about Pallbearer. I love what we do in the studio — it’s always an enriching experience and I’m proud of the work we’ve done. But to me, all of that without the other side of the coin, which is us taking those songs and letting them evolve into something different in the live setting — to me, that’s the ultimate form of the songs. What’s done in the studio is the larval stage of the songs, and they eventually become a fully fledged creature once we’ve been out playing them for a year or two. They take on their own new life. The cavity that exists without [live music] being a part of our repertoire is pretty deep.

Our thanks to Pallbearer’s Joseph D. Rowland for taking the time to speak with us. Pre-order Forgotten Days via Nuclear Blast or Amazon.