Sacha Baron Cohen Hits Back at Trump: He and Jeffrey Epstein Probably Talked About How Creepy I Am 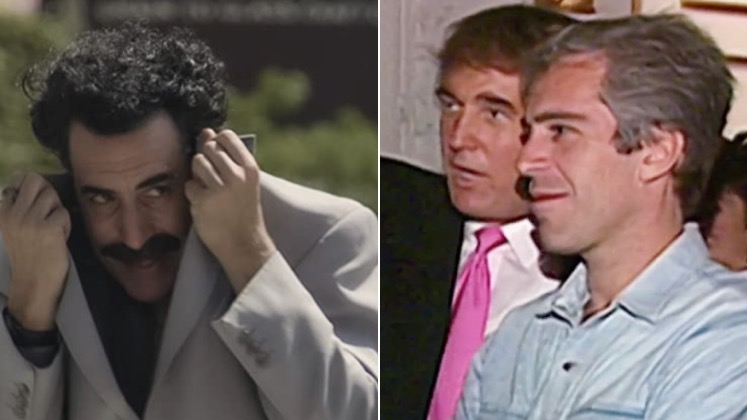 After his personal attorney, Rudy Giuliani was caught with his hands in his pants in the new Borat film, Donald Trump responded by calling Sacha Baron Cohen a “creep,” a “phony,” and added, “I don’t find him funny.”

During an appearance on the Late Show with Stephen Colbert on Monday, the Borat creator and star was asked if he had any defense against Trump’s accusations. “When he was hanging out with his good friend Jeffrey Epstein,” Cohen replied, “they probably spent a lot of their time talking about how creepy I am. And, yes, I am a professional phony — like he is.”

Cohen also addressed Trump on Twitter over the weekend.  “Donald—I appreciate the free publicity for Borat! I admit, I don’t find you funny either. But yet the whole world laughs at you,” he wrote on Twitter. “I’m always looking for people to play racist buffoons, and you’ll need a job after Jan. 20. Let’s talk!”

Elsewhere during his chat on Colbert, Cohen relayed his experience interviewing Trump on Da Ali G Show in 2003. “The producer of the show was a very handsome, well-spoken Englishman with a nice tweed jacket. Donald Trump assumed he was going to be the interviewer. And then the producer said, ‘No, this is the interviewer — he’s called Ali G.’ And I remember Donald Trump looking at me wearing a silk sweatsuit — and his face dropped, he was immediately furious that he was going to have to speak someone from a lower-class  borough.”

“And actually he sat through the interview for seven minutes. Publicly, he’ll say he was the only guy who saw through it. He didn’t see through the interview. He answered all the questions completely normally,” Cohen continued. “It was only really when I was asking him for money — for a business scheme I had for an ice cream glove — at that point he was quite rightly not interested. But he completely believed Ali G was real.”

Cohen also shared a behind-the-scenes clip from the Borat Subsequent Moviefilm of him fleeing from an alt-right rally after his cover was blown. At he told Colbert, there was some concern after they became aware “that one of the guys who stormed the stage went for his pistol.”