"The music will live forever, and I'll sing it as long as live" 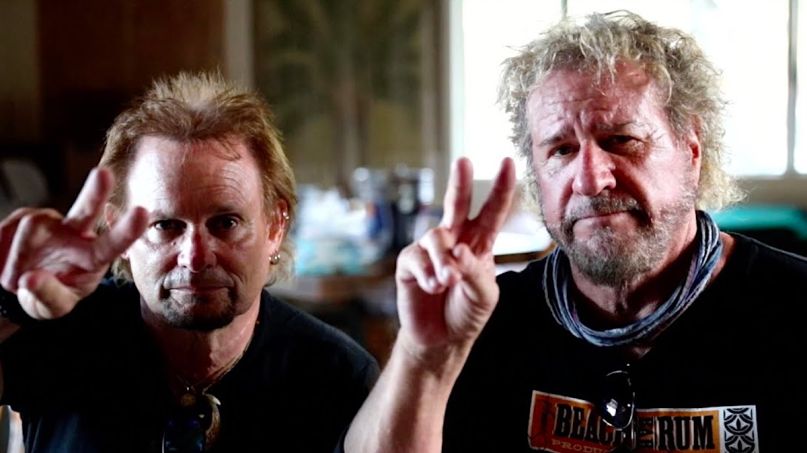 Former Van Halen members Sammy Hagar and Michael Anthony have paid tribute to the late Eddie Van Halen with a new video message. The pair happened to be getting ready to perform at Hagar’s “Birthday Bash” concert this week at Catalina Island when news of the guitarist’s death broke on Tuesday.

The two musicians had both been estranged from Eddie for several years, with Hagar revealing Wednesday that he had recently made peace with the guitarist. Previously, Hagar and Anthony shared very short statements on social media, both expressing that they were heartbroken over Eddie’s death.

In a new video message filmed during rehearsals for Hagar’s annual birthday bash, Hagar and Anthony expressed how shocked they were to hear the news of Eddie’s passing.

“For Mike and I, it was just like getting hit by a freaking Mack truck,” Sammy said. “It kind of took the wind out of the sails. I just wanna say that I’m kind of devastated. A Van Halen song never felt so hard to sing and play in my life.”

Added Anthony, “It was hard. It’s very surreal right now. It hasn’t sunk in yet.”

Hagar continued, “The music will live forever, and I’ll sing it as long as live.” And Anthony concluded, “We love you, Eddie.”

The “Sammy Hagar’s Birthday Bash” concert is being filmed today (October 8th), with Sammy Hagar & The Circle (who include Anthony as a member), Rick Springfield, and REO Speedwagon’s Kevin Cronin performing. The show will broadcast as a pay-per-view event on October 17th. The annual event was moved from Hagar’s Cabo Wabo Cantina in Mexico to Catalina Island in California due to the pandemic.

At the end of the video tribute, there’s footage of Hagar asking for a moment of silence before the band broke into Van Halen’s “Right Now” during an onstage rehearsal.

Reports circulated in late 2018 that Michael Anthony was going to rejoin Van Halen for a 2019 stadium tour. In a brand-new interview with Pollstar, Van Halen’s manager, Irving Azoff, confirmed that there was every intention of the band’s classic lineup — Eddie, David Lee Roth, Alex Van Halen, and Anthony — embarking on that tour. However, Eddie “was physically unable to do it.”

Watch the video tribute from Sammy Hagar and Michael Anthony below.