Perhaps, this impression might not be a matter of national importance 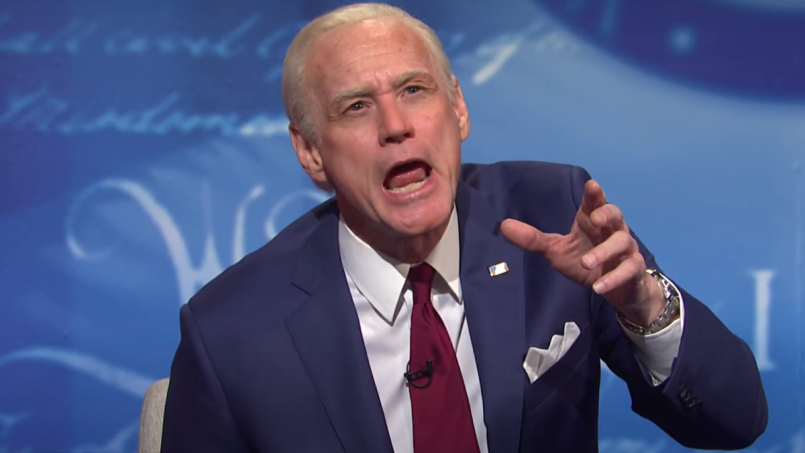 What was big, exciting entertainment news just a month or so ago has already become routine tedium: Jim Carrey played presidential candidate Joe Biden on Saturday Night Live. For the third week in a row, the blockbuster comic returned to Studio 8H, where Issa-Rae hosted the festivities. Three sketches into his run, however, and it’s hard to find anyone who appears to be enjoying his antics. (Then again, social media presents a comically skewed demographic of people who more or less despise Saturday Night Live, but feel compelled to provide running commentary anyway. Come to think of it, that’s likely how a lot of SNL writers probably feel about the presidential election.)

This week’s endless cold open–under 15 minutes, but, as with last week’s, feeling closer to a full hour–toggled between Biden and Trump’s dueling town halls, a format as ungainly as, well, two simultaneously broadcast network-TV town halls in place of a debate. And so the sketch simulated channel-flipping between Alec Baldwin’s Trump doing battle with NBC’s Savannath Guthrie (cynically positioned as an uncomplicated, crusading feminist hero–the Kate McKinnon special, in other words) and Carrey’s Biden rambling on as ABC’s George Stephanopoulos (Mikey Day) lost interest.

Let’s set aside the tedious both-sides dishonesty of this approach, with its tacit complaints that ABC’s special was too easy on the one non-idiot running for president this year, and examine Carrey’s performance. Technically speaking, Carrey has a better eye for Biden’s manner–the gleaming smile, the clunky folksiness, the tone of his voice–than SNL’s last regular impersonator Jason Sudeikis. What Sudeikis had, though, was an easy rapport with the audience. His Biden was pretty much just a watered-down version of The Onion’s absurdist Diamond Joe, crossed with the Sudeikis Genial Enthusiast persona. But Sudeikis was accustomed to the rhythms of SNL, and knew how to pop in a scene opposite an equally seasoned co-star. As much of a showboater as Carrey is, his timing isn’t always crack on live TV, though sketches that labor to insert him into the action, often with ill-advised cutaways, don’t do him any favors.

More notable about Carrey’s recent appearances as Biden has been his clear desire to stretch his legs, comedically. Last week, in a tortured riff on the fly that landed on Mike Pence during the VP debate, Carrey’s Biden went through a teleporter that turned him into Jeff Goldblum’s man-fly hybrid from the David Cronenberg film The Fly. This gave Carrey an amusing if inexplicable chance to both imitate Goldblum and puke up a bunch of goop onscreen. This week, the channel-flipping concept culminated in his Biden switching into a Mr. Rogers guise (inspired by a much-mocked tweet suggesting that Biden’s resemblance to one of the most beloved figures in TV history was a very bad thing indeed), followed by a foray into Bob Ross territory.

This wasn’t wildly funny. In fact, it was pretty hacky: Bob Ross has been a kiddie-cartoon level reference for decades at this point. But there is a demented energy to Carrey’s shapeshifting that makes him more interesting to watch than a wheezy, exhausted Trump impression from Baldwin. If you squint a little, it sort of tracks with Biden’s elderly-go-getter vibe. Maybe if the sketch had opened with the Mr. Rogers bit, it would have landed better. It’s a little insular, sure, but it would beat the typical SNL routine of reciting bullet-point quotations from the past week’s news. It just isn’t a format that works particularly well for Carrey, a stranger and less predictable comic presence than the mark-hitting graduates that SNL trains every year. For two weeks now, he’s wriggled around in a sketch format full of constraints, from its dialogue to its obligatory walk-ons to, yes, its wan both-sides posturing. And to be fair, Carrey’s brand of virtuosic soloing is both not operating at full power, and not particularly conducive to the kind of team effort that powers the better SNL material.

It seems unlikely, though, that the show is going to radically rethink its approach to Biden weeks before a national election–and Political Twitter, rarely content to focus on their area of expertise, has thoughts about this! The consensus following this week’s episode seemed to be that Carrey nonetheless must go. “There’s no reason SNL can’t switch it up and replace Jim Carrey,” opined Yashar Ali. Charlotte Clymer made a bold suggestion that amounted to: Just have Kate McKinnon do it! (McKinnon is very talented. And her reputation as a master political impressionist is absolutely confounding.) Plenty of others suggested that the show should bring back Jason Sudeikis, as if a popular alumnus of the show must have been begging for the job rather than, say, uninterested in the first place. (And, again, Sudeikis: Wonderful sketch performer. Not really an impressionist.)

Alec Baldwin could not be reached for comment on how the common-sense consensus that a big-name actor must be removed from his SNL gig has gone for him, a performer who at times seem to be actively attempting to leave the role, to no avail. But yes, technically it’s true that Carrey could be fired two weeks before the election. The truth is, it would barely make a difference. A new actor would not magically change SNL‘s anemic last 10 years of political cold opens. In fact, the last time the show did replace a presidential impression, it threw over Fred Armisen’s Obama for Jay Pharoah’s version. Granted, this was the right thing to do, both morally (the multi-ethnic Armisen was essentially doing soft blackface) and comedically (Pharoah had a much, much stronger command of Obama’s voice and mannerisms). But, it also didn’t make the Obama-era political sketches any better. And really, there’s much less of an imperative here: Carrey is not race-bending to play Biden, and if, say, new featured player Andrew Dismukes has a perfect Joe Biden impression in his back pocket, it probably would have come up at his audition.

It also bears consideration that if Biden wins in November, Carrey probably won’t have the same tenure at SNL as Baldwin, a New York resident and longtime friend of the show. If Carrey is still doing Biden in September 2021, I’ll happily call for his removal. For now, though, these endless debate recreations can’t be laid at his feet. SNL’s political sketches are bad–or anyway, their cold-open impression-laden sketches are. In this very episode, they had two much funnier political bits: One an ad for “Five-Hour Empathy,” a product that a supposedly sensitive white male played by Beck Bennett will do anything to actually avoid taking, and another featuring Bennett and Kyle Mooney as Wolverine Watchmen-style militia members demanding the mask-free re-opening of their favorite fast-casual restaurant. Is it weird that these bits were funnier and more specific than one of the biggest comedy stars of all time impersonating a near-universally known political figure? Sure. Is it surprising? Not for anyone who’s been paying attention to Saturday Night Live.