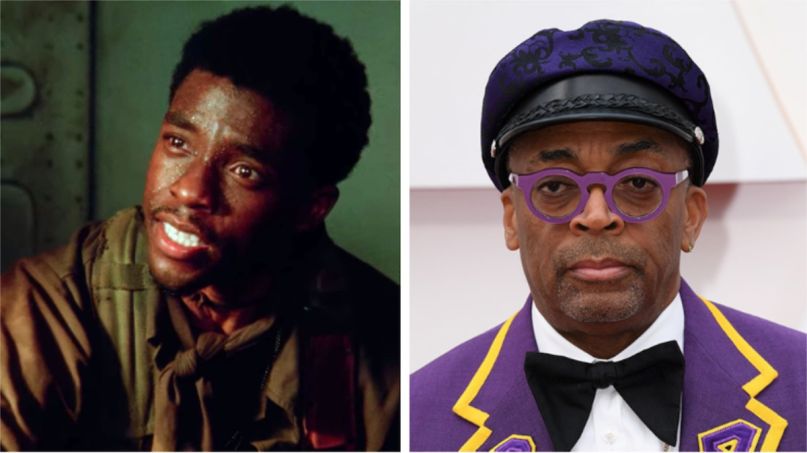 Spike Lee has discussed one of Chadwick Boseman’s final film shoots, and the moment in which he knew the actor was a blessed by God’s “heavenly light”, in a new interview with Variety. Boseman passed away this August at the age of 43 following a secret four-year battle with colon cancer.

The lengthy profile includes a Q&A with Lee where the legendary director talked politics, coronavirus, and the ways in which Black and Brown people have steered New York City. Eventually the conversation turned to Da 5 Bloods, his Vietnam war film released earlier this year, and his experience working with the late Boseman. The film marked Boseman’s second to last role.

“I didn’t know Chad was sick,” Lee commented. “He did not look well, but my mind never took that he had cancer. It was a very strenuous shoot. I mean, we all didn’t get to Vietnam until the end of the movie at Ho Chi Minh City. But that other stuff, the jungle stuff, was shot in Thailand. It was 100 degrees every day. It was also at that time the worst air pollution in the world. I understand why Chadwick didn’t tell me because he didn’t want me to take it easy. If I had known, I wouldn’t have made him do the stuff. And I respect him for that.”

That’s when Lee recalled his first reaction to hearing of Chadwick’s passing. The director found himself reflecting on his role in Da 5 Bloods, particularly on what he now believes were signs that Boseman was being blessed by God, saying:

That night, for some reason, I went to bed early. And the fact that I went to bed early, I woke up early. It must have been I was tired. I went to open my phone, and my phone — the whole thing had been blowing up. I turned it off. I was in shock. And most recently, with my lovely wife, Tonya, we watched it [Da 5 Bloods] again for the first time after his transition. And it plays totally different. He’s a ghost already. You know the scene I’m talking about? It’s the scene where he comes back, him and Delroy. I felt it when we shot it.

There’s a line in the movie where Clarke [Peters] says he’s the best damn soldier ever. And Chadwick was — is — a soldier. This is conjecture: There’s a possibility he thought this might be his last film. And God gave him one more with “Ma Rainey’s Black Bottom.” But now looking at that, he was playing it. Stormin’ Norman says, “If I have to go out, I’m going gangbusters.” And that’s what he did.

The full interview is available to read over at Variety.

Countless tributes to Boseman have poured in over the past few weeks, including personal notes from his Marvel co-stars, director Ryan Coogler, actor Sienna Miller, and Michael B. Jordan. Boseman’s hometown of Anderson, South Carolina is planning to erect a statue of him as a memorial as well.