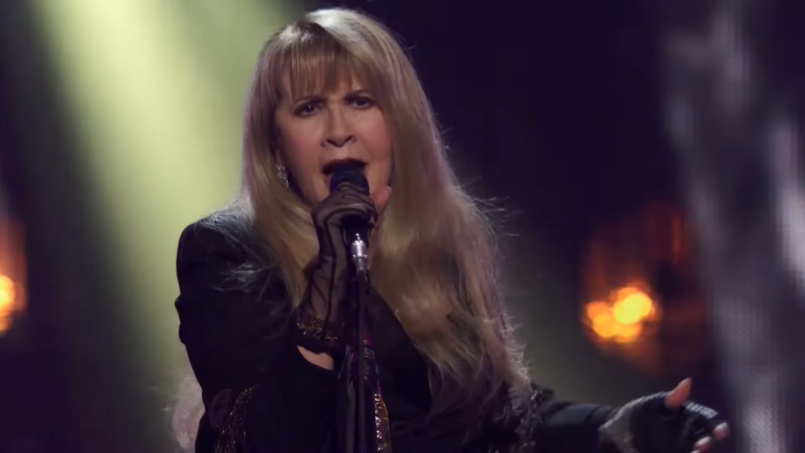 We already knew Stevie Nicks was an absolute legend, but here’s yet another reminder. In a new interview with Variety, the 72-year-old icon revealed that she was battling a nasty case of double pneumonia when she performed last year at the 2019 Rock and Roll Hall of Fame induction ceremony.

“The night of the Rock and Roll Hall of Fame, I knew before I went on stage that something was wrong with me, so I had to really pull it together,” Nicks told Variety.

This was no ordinary case of the sniffles, either. The day after she took the stage before a national audience, the Fleetwood Mac member was rushed to a hospital in Philadelphia where she spent a week in the ICU being treated for the aforementioned pneumonia, as well as human metapneumovirus and asthma.

The topic came up in the interview after Nicks morosely mentioned that if she gets the coronavirus, “it’ll kill me.” The Grammy-winning singer now has compromised lungs, and after seeing how much damage a ventilator did to her mother (“she was hoarse for the rest of her life”), she’s understandably terrified about getting it herself and losing her career — which she’s adamant about continuing after this virus passes. ” I don’t want to not pull on those boots again.”

Elsewhere in the interview, Nicks spoke about the surprising 2020 resurrection of Fleetwood Mac’s “Dreams”, her new concert film, and keeping spiritually in touch with Tom Petty and Prince. She also offered her thoughts on this year’s Rock & Roll Hall of Fame induction ceremony, which has been turned into a virtual event due to the pandemic.

“Do you know what I would have done if I ran the Rock and Roll Hall of Fame? I would have just said, ‘We’re going to take a pass this year. Hopefully it’s just a year. So we’re going to do it next year, and hopefully everything will be back to normal enough where we can do it the way it’s supposed to be done.'”

She continued, “I mean, it’s the biggest deal in the world. The only people that think it isn’t a big deal are the people who don’t get in. The second that your name goes up, you’re like, ‘Oh my God, it’s a really big deal.’ And so I’m very sorry that it’s going to be done in some sort of a weird (virtual) reality way, because it’s like not going to the ball.”

In the spirit of keeping on during this horrendous era, Nicks released her first solo song in almost a decade earlier this month — featuring drums from Dave Grohl! Meanwhile, in another recent interview with The Guardian, she discussed aging gracefully, finding love in her later years, and revealed that Fleetwood Mac wouldn’t have happened “if I had not had that abortion.”

Now that you know the gig preceded a week-long stay in the ICU, revisit Nicks’ incredible performance from last year’s Hall of Fame induction ceremony.