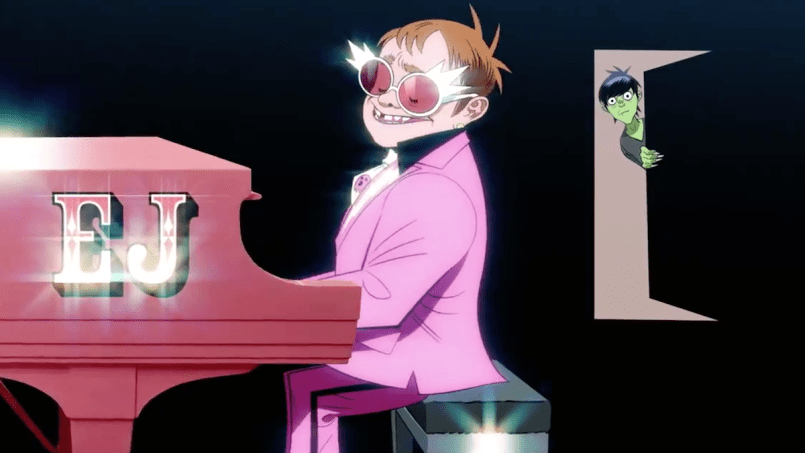 In just a matter of weeks, Gorillaz will unleash their star-studded new musical collection, Song Machine: Season 1 — Strange Timez. The most recent preview we heard boasted the unparalleled talents of The Cure’s Robert Smith. Looking to outdo themselves, Gorillaz have now released a collaboration with thee Sir Elton John, titled “The Pink Phantom”.

A bit reminiscent of John’s own “Bennie and the Jets”, this new song features a steady beat marching alongside The Rocket Man’s emphatic piano chords. Here, John’s vocals seem to echo and fill up all the available space, as though he were belting out the anthem from inside an arena (soon!). The animated British band also welcomes extra bars from guest rapper 6LACK.

On Twitter, John said of the track: “I’ve always been a Gorillaz fan so when Damon [Albarn] reached out and asked me to get involved it was a no-brainer. The way the song turned out is just great – I can’t wait for you to hear it Rocket.” Listen to “The Pink Phantom” below via its very entertaining video.

Song Machine: Season 1 — Strange Timez is due out October 23rd. For more of the collection, revisit “PAC-MAN” featuring ScHoolboy Q, “Momentary Bliss” with slowthai and Slaves, and the Peter Hook-assisted “Aries”, one of our favorite songs of the year so far. A deluxe edition promises additional joint tracks with St. Vincent, Beck, Unknown Mortal Orchestra, EarthGang, and JPEGMAFIA, among others.

In support of the release, Gorillaz will present Song Machine Live. Going down December 12th and 13th, the digital event promises a unique blend of visuals and live Gorillaz performances of music  from Song Machine: Season One – Strange Timez.

The @Gorillaz track I worked on is out tomorrow! I’ve always been a Gorillaz fan so when Damon reached out and asked me to get involved it was a no-brainer. The way the song turned out is just great – I can’t wait for you to hear it 🚀https://t.co/NK05tiGFeR pic.twitter.com/v0pXmz3rHn