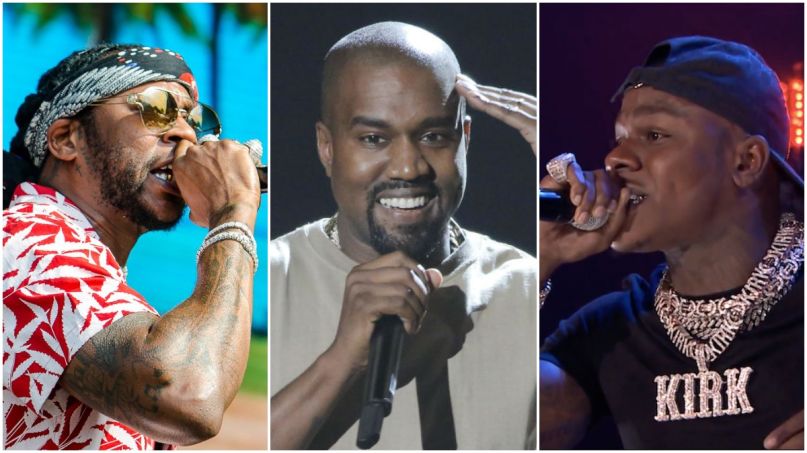 Kanye West has shared a remix of his new song “Nah Nah Nah” featuring verses from DaBaby  and 2 Chainz. Yeezy uploaded a two-plus-minute snippet of the track to Twitter earlier today.

Last week, West confirmed that DaBaby would be on the track by sharing a 15-second clip of his verse, but today’s drop is the first we’ve heard of 2 Chainz’s involvement. The two-and-a-half minute clip puts most of the focus on DaBaby, though, who delivers a genuinely incredible verse atop the bouncy beat, which is reminiscent of the JetsonMade instrumentals that made DaBaby a star back in 2019.

In one bar, DaBaby references West’s pledge to never make “secular” music again: “Don’t know how to make secular music / I hope Ye like it, I hope he still use it.” But in other bars he calls god a woman and tells her to “back that ass up” and says, “Forgive me and her it’s a time to repent/  And it clap like, ‘Amen,’ from the back when I hit it.” Sounds pretty secular to me, DaBaby.

Kanye joins DaBaby for a brief auto-tuned croon on the hook, but then gives way to 2 Chainz. “If one more person call me and ask me, ‘What’s wrong with Ye?’/ That’s a grown man, I can’t tell him what he can and can’t say,” he raps during his opening line before delving into standard 2 Chainz-isms: “Never been a Yes Man so I don’t feel like I have to explain/ F y’all n*****, ex-drug dealer, ex-ball player, X Games.”

The track cuts off right in the middle of 2 Chainz’s sentence, but you can take a listen to two minutes and 20 seconds of the song below.

Earlier this month, DaBaby contributed a killer verse to the remix of Dua Lipa’s “Levitating”, while 2 Chainz linked up with Lil Wayne for a track on his Tha Carter V deluxe edition. Outside of “Nah Nah Nah” and this new remix, Kanye has continued being Kanye.