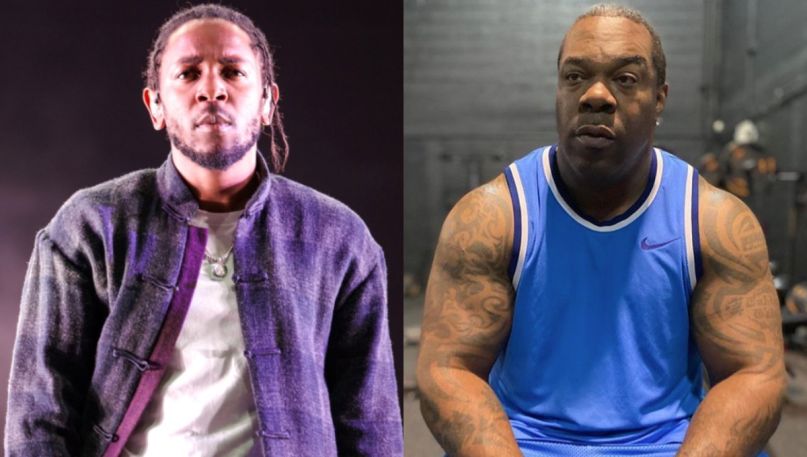 Veteran rapper Busta Rhymes has more to flaunt these days than just a fresh physique: his forthcoming album features the first new Kendrick Lamar verse of 2020. Their collaborative song is called “Look Over Your Shoulder” and has been released today in anticipation of the album’s October 30th release.

“Look Over Your Shoulder” technically dates back a few years. The joint track was initially leaked around 2018, and then recirculated again in 2019. Even so, at this point — more than three years removed from the damn good DAMN. — any Kendrick is good Kendrick.

As with those early leaks, the 2020 version is built around the Jackson 5 classic “I’ll Be There”, with Busta and Kung Fu Kenny trading bars both sentimental and boastful. During his anticipated turn in the spotlight, Kendrick proudly declares, “I lead this new generation, boy.” (Is he wrong?) The Compton MC also name-drops comedian Chris Rock, who helped Busta announce his new album back in August.

Check out the single down below, followed by Kendrick’s full verse.

As for King Kendrick, he was most recently heard on SiR’s “Hair Down” single from 2019. He also contributed bars to Beyonce’s The Lion King: The Gift and J. Cole’s Revenge of the Dreamers III compilation from that same year. In 2018, Kendrick gave us the stellar Black Panther soundtrack.

Kendrick Lamar’s “Look Over Your Shoulder” lyrics (via Genius):

I wrote my first bars in the car with Stacy
How bizarre, my battle scars at large would lace me
Big marbles, nigga
I lead this new generation, boy
Don’t argue with us
Marvelous beat selectors, authors and novel spitters
And it’s all for thе literature
And it’s all for the hidеous
The nastiest flows, the chlamydia, uh
I ain’t afraid to say I need you, ah, yeah (Hip-hop, hip-hop, hip-hop)
I promise I’d never leave you, ah, yeah
My life is like twelve open mics of hopeless notes
I write for sure, my folks unite
Soon as the flow get nice
The poltergeist that scare emcees
My prototype for every
My share of D’s and R.I.P
She know my type of style is like my everything
Apparently, my appetite stay famished
Bite no hand that feed
The culture vulture die and bleed
My focus hold these thoughts and dreams
Control this pen (Look over your shoulder)
Boldest lines in rhymes and things
Devote my time and mind it seems
Supposed to shine, remind I’m king
Provoke the blind and bomb the fiends
The pros the cons, the diamond rings
The forward time, but I’ma bring
The soul divine and cross between
What’s yours and mine’s, the gold, the green
The roads that show just what it mean
That grabbed Shakur and by the wing
And fly before my vocal scream
For hip-hop, look at my Ziploc bag full of goodies
You Chris Rock
Hit the pookie and pit stops
Since tube socks, baby, you a hell of a drug
Just look over your shoulders
When they fuck you over
It’s love, I know ya