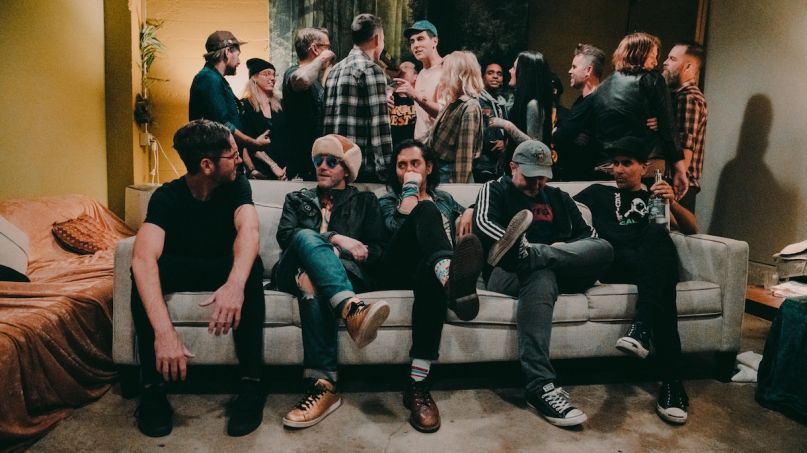 Just in time for the spooky season, Saves the Day have covered two Misfits songs, “Some Kinda Hate” and “Where Eagles Dare”. These new renditions appear on a split EP they recorded with Senses Fail titled Through Being Ghoul, which is indeed a play on Saves the Day’s iconic Through Being Cool album from 1999. (The band’s press photo seen above is also a nostalgic throwback.)

“Some Kinda Hate”, taken from the Misfits’ 1985 Legacy of Brutality compilation, and 1979’s “Where Eagles Dare” are both given new life here with full band instrumentation and modern production. If you’re wondering whether Saves the Day frontman Chris Conley could adequately capture Glenn Danzig’s signature vocal growls, fear not: he imbues the two tracks with a healthy mix of emo and punk weirdo. It’s an appropriate homage to the seminal horror-punk band.

Stream Saves the Day’s half of Through Being Ghoul down below.

Because of the pandemic (which has felt like one long horror movie), Saves the Day postponed their spring tour with Third Eye Blind. Their last album, 9, was released in 2018. As for the Misfits, the band recently mourned the death of former drummer Joey Image.

Through Being Ghoul Artwork: