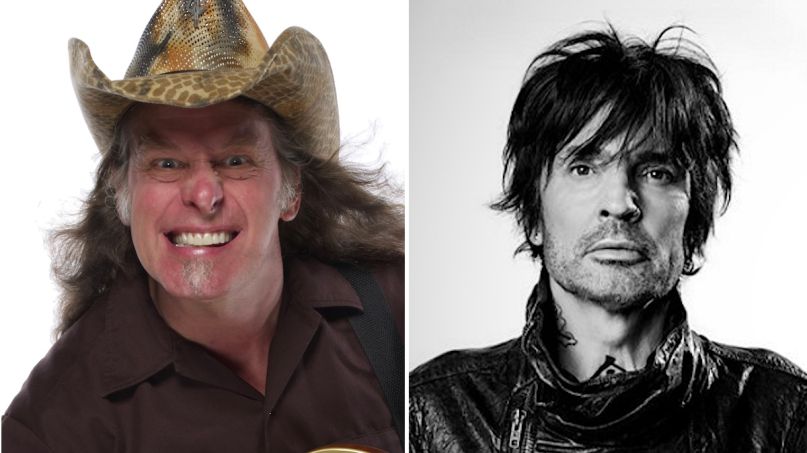 Ted Nugent has seemingly gone out of his way to start a beef with Tommy Lee, calling the Mötley Crüe drummer “a convicted felon, domestic violence heroin addict.” While the two rockers are on opposite ends of the political spectrum, the verbal attack still appeared to be unprovoked.

The right-wing Nugent is famously pro guns and pro-Trump, while Lee is decidedly anti-Trump. The Mötley Crüe drummer even said in a recent interview that he would leave the United States if Donald Trump wins the upcoming presidential election. The Nuge, on the other hand, is selling “Re-elect That Motherf**ker” baseball hats on his website.

As a guest on the political podcast Blunt Force Truth, Nugent discussed his recent appearance on Sammy Hagar’s AXS TV show Rock and Roll Road Trip. The guitarist explained, “The producers wouldn’t let [Sammy] near me, even though he and I go way back; we’re dear friends. They thought I was dangerous, that I’d come out with a machine gun or I’d slaughter an innocent fawn on television. This is stupidity!”

Nugent continued, “I said, ‘So, your producers were afraid of me, but they did a show with Tommy Lee, who’s a convicted felon, domestic violence heroin addict.’ They’re okay with this guy, but not with the Ted Nugent Kamp for Kids charity, teaching kids to be clean and sober. I said, ‘Sammy, cold-cock those sons of bitches and get out and let’s do the show.’ So, finally, they dangerously acquiesced, and we did the number one Sammy Hagar Rock and Roll Road Trip show.”

Update, October 14th: Tommy Lee has fired back at Ted Nugent, tweeting, “Is that guy even still alive? … I thought he shot himself like 20 yrs ago.”

It is true that Tommy Lee and other Mötley Crüe members engaged in copious amounts of drugs back in the day. And the drummer did serve time in prison for a domestic violence case involving his then wife Pamela Anderson. So, Nugent isn’t just making stuff up, but calling Lee out when not directly asked about the drummer seemed like the guitarist was ready to start a verbal war.

Lee, who is releasing his new solo album, ANDRO, this Friday, appeared on the very first episode of Sammy Hagar’s Rock and Roll Road Trip in 2016. Nugent was a guest on an episode that aired this past May.

As of this posting, Tommy Lee has yet to respond to Nugent. See our recent two-part Zoom interview with the drummer below.