This is what a live music video looks like in 2020 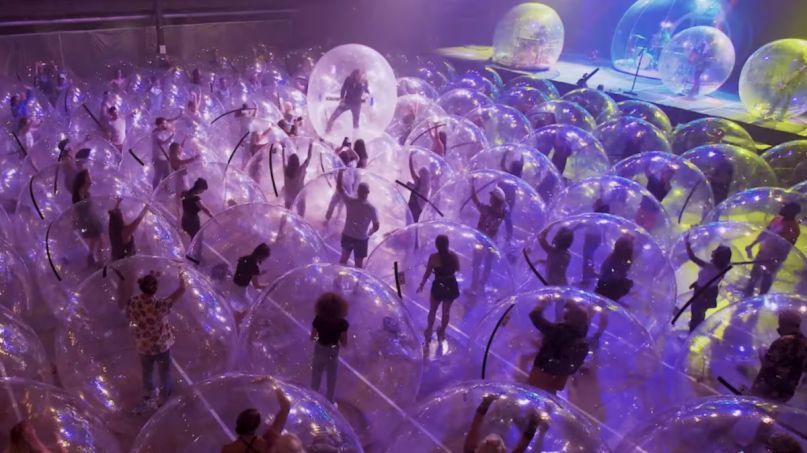 Two weeks ago, The Flaming Lips went through with their plans to perform a concert for an audience entirely encased in space bubbles. Cameras were rolling, and the band has turned the footage into a new video for “Assassins of Youth”.

As the Flips play the American Head cut from their own plastic spheres on the stage, frontman Wayne Coyne rolls out onto the crowd. Of course, it’s a standard practice for Coyne at this point, but somehow it seems even trickier with everyone in the audience also in a bubble. Regardless, it looks like everyone is having a blast, from people joyfully bouncing around in their socially distanced balls (some even two to a bubble) to Coyne being able to sing into fans’ faces again.

“Of course, our MAIN priority (when doing the performance for the music video) was making sure everyone was safe and all the health cautions were being enforced,” Coyne, who directed the video, said in a statement. “I forgot about how exciting and fun and ridiculous it is to do a Flaming Lips show!!! I think the video shows it!!!”

Watch the “Assassins of Youth” video below for what could be a preview of live music in the months ahead.

The concert, which took place at the Oklahoma City venue Criterion, isn’t technically the first time The Lips played music from inside of a bubble. The group’s members were separated by spheres for their performance of “God and the Policeman” on Fallon in September, as well as for their NPR Tiny Desk (Home) concert earlier this month. They also had an encased audience when they played “Race for the Prize” on Colbert over the summer.

It’s all been a test run for what the band hopes is an actual ticketed event. “We think maybe playing two shows a night, and getting a big audience in there each time,” Coyne said previously. “The place that we’re at at the moment, it holds almost 4,000 people, but it only holds a hundred space bubbles. So it’s a lot of space in there.”