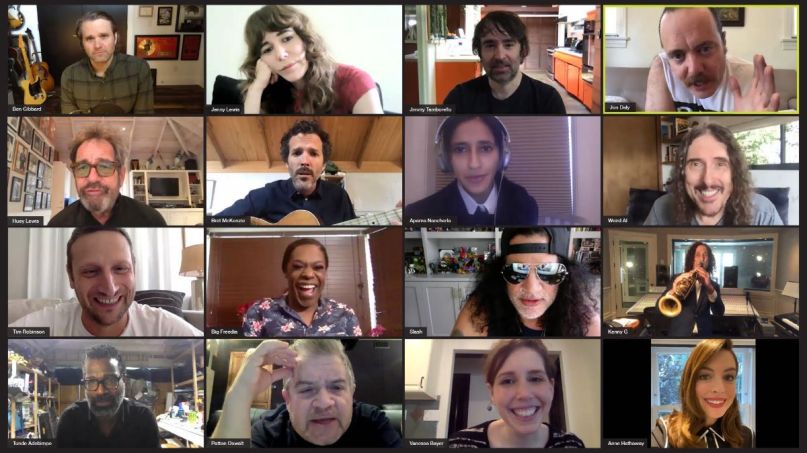 On Tuesday, The Postal Service posted a video on Twitter that teased “your meeting will begin tomorrow.” That get-together has arrived now, and it’s a literal Zoom call featuring a reunited Postal Service and over 20 celebrities and musicians.

In the 19-minute clip, The Postal Service’s Ben Gibbard, Jimmy Tamborello, and Jenny Lewis hold “auditions” for various famous folks that want to join the band. And there are many who are very eager to sing “Such Great Heights”: “Weird Al” Yankovic, Kenny G, Slash and Duff McKagan of Guns N’ Roses, Huey Lewis, Anne Hathaway, Japanese Breakfast, and Rick Springfield all show up for tryouts.

Directed by Tom Sharpling, the video serves as a PSA for Headcount and their early voting-focused Make Your Vote Count initiative. Watch the full thing below.

The Postal Service released a similarly themed video back in 2013 in honor of their 10th anniversary. We’ve seen a few mini band reunions since then, such as when Death Cab for Cutie and Lewis performed “Nothing Better” while touring together in 2019. This past August, Gibbard played “Such Great Heights” for the virtual edition of the Democratic National Convention, and even dedicated it to the actual United States Postal Service, which has been suffering major budget cuts thanks to Trump.