The War on Drugs Debut New Song “Ocean of Darkness” on Fallon: Watch

The group's first original song since 2017's A Deeper Understanding 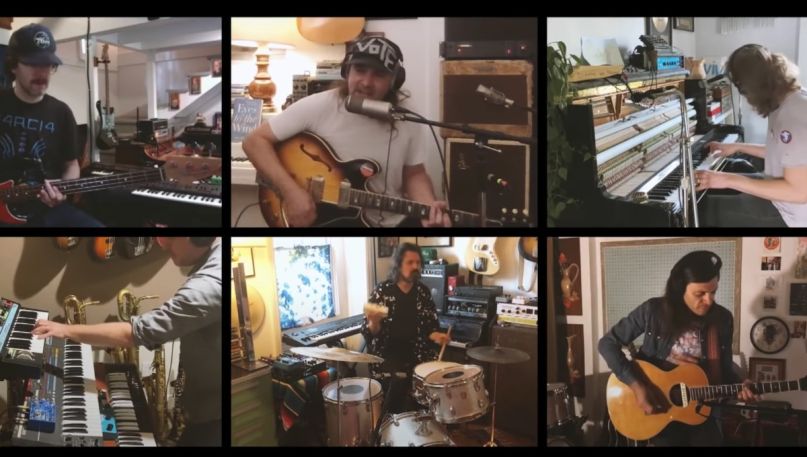 The War on Drugs on Fallon

During the early months of the pandemic, The War on Drugs revealed they were working on a new album. Now, some of the fruits of their labor have arrived: the indie rockers debuted a new song called “Ocean of Darkness” on The Tonight Show Starring Jimmy Fallon on Friday.

The group’s first offering since 2017’s A Deeper Understanding was both propulsive and pastoral, and soaked in wistfulness not unlike their past material. Donning a cap that said “VOTE”, frontman Adam Granduciel could be heard singing, “You’re just a poor boy/ Your blood rushes through me/ Alone in the great divide/ To love and understanding.”

“Once I was eight years old/ I’d stare at the ceiling/ Get lost in a memory,” he continued, his voice faded like a ghost half-materialized. “Remember the feeling/ I was tired of waiting/ Feeling misunderstood/ And now I’m fading away into these oceans of darkness/ Come pulling me back for good.” Watch the full thing down below.

Prior to the band’s virtual performance, Fallon called “Ocean of Darkness” a new “unreleased” track and held up what appeared to be the artwork for the single. Not surprisingly, it looked like a nearly pitch-black shoreline.

It’s unclear when this new War on Drugs album will see release, but they did preview three “almost finished songs” during a livestream back in March, so there’s probably a good chunk of material ready to go. In the meantime, The War on Drugs are expected to drop a new live album titled LIVE DRUGS on November 20th. The group also recently remixed The Rolling Stones’ “Scarlet”.

The War on Drugs “Ocean of Darkness” artwork