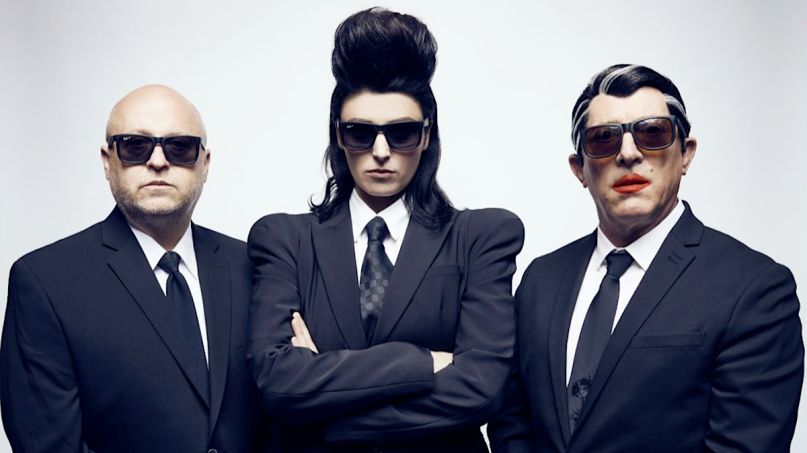 Five years after the release of their last album, Money Shot, Puscifer are back with their fourth LP, Existential Reckoning. As with the band’s previous releases, the album comes with an abundance of intrigue and mystique.

Puscifer — featuring core members of Maynard James Keenan (Tool), Mat Mitchell, and Carina Round — have crafted a 12-song album that is both experimental and cinematic in quality. The songs range from the dance-y “Apocalyptical” to the angry “Fake Affront”.

The album also continues the story of the fictional characters Billy D and his wife, Hilda Berger, who’ve been portrayed by Keenan and Laura Milligan, respectively, in promotion of the band’s previous LPs. Along with the announcement of Existential Reckoning came a classified document that reported on an alien abduction.

Thus far, the band has released the singles “Apocalyptical” and “The Underwhelming”. Additionally, Puscifer are set to stream a concert from the middle of the Arizona desert on Friday (October 30th), the same day as the album’s release.

Existential Reckoning can be pre-ordered here, while tickets to Puscifer’s “Live at Arcosanti” streaming concert can be purchased here. In advance of the LP’s release this Friday, here are five things to know about the new Puscifer album:

01. The single “Apocalyptical” sounds like it was written during and for the pandemic, but was actually completed months earlier.

With its title and lines like, “Go on, moron/ Ignore the evidence” and “Concrete conclusions be damned/ They won’t believe you until it’s far too late”, the song “Apocalyptical” sounds like a condemnation of the Trump administration’s response to the COVID-19 pandemic. However, the song was completed in 2019, and as Keenan told us in our recent interview, the timeliness of the lyrics are a product of his broad approach to songwriting. “I remember my art teacher in high school, when we were doing more elaborate pieces with charcoal, which is a very unforgiving medium if you’re not familiar with it,” he explained. “She was always saying, ‘Go general to specific, always start general.’ … I’ve always kind of taken that away as a way to tell stories.”

02. The band used a vintage Fairlight CM IIx computer instrument as an essential part of the recording of Existential Reckoning.

Mutli-instrumentalist Mat Mitchell, who composes most of the music for Puscifer, utitilized the Fairlight CM IIx computer musical instrument, in the recording of Existential Reckoning. The device — a digital synthesizer, sampler and audio workstation all in one — gained prominence in the early ’80s, specifically with artists such as Peter Gabriel, Kate Bush, and Stevie Wonder. “The Fairlight, specifically, is something we decided, before we started this record, that I wanted to use as a foundation,” Mitchell told us. “It’s a very unique sound, trying to figure out how we make it our own — how we do what we do, but with this instrument. I think it helped shape the results of the record.”

03. Billy D is currently missing and has apparently been abducted by aliens.

The story of Billy D, the blond-coifed persona portrayed by Keenan, picks up with him being abducted by aliens. As the classified document that accompanied the album’s announcement reported, “In the Summer of 2016, we received a call from Hildy Berger, Billy D’s loving wife. [REDACTED]. Billy D, rumored to have been carrying nothing but a bottle of wine and a mysterious briefcase, had disappeared without a trace somewhere in the high deserts of the Southwestern United States. Rumors of alien abduction were at the forefront throughout the dark web chatter.”

04. The harmonizing between Maynard James Keenan and co-vocalist Carina Round throughout Existential Reckoning is absolutely stunning.

Having heard the entire album, we can attest that the dual vocals of Maynard James Keenan and Carina Round is among the many highlights of Existential Reckoning. The harmonizations throughout the album are breathtaking, and as Maynard told us, there’s a lot of give and take that goes into the vocal recording. “I feel like sometimes because I’m trying to push that so far, I might paint myself into a corner, and Carina is great for helping me dig my way back out of the corner,” explained Keenan. “She’ll hear the bigger picture, ’cause when you’re in the middle of it, it’s hard to see the forest for the trees.” Hear for yourself in the album’s second single, “The Underwhelming”, below:

05. Existential Reckoning arrives almost 25 years to the day since Puscifer debuted on the HBO sketch comedy series Mr. Show with Bob and David.

Twelve years prior to the release of their 2007 debut album, “V” Is for Vagina, an incarnation of Puscifer appeared on the first-ever episode of the brilliant HBO sketch comedy series Mr. Show with Bob & David. As Maynard told us, Puscifer weren’t just a fictional band created at the time for the Mr. Show appearance. “It already was a band — it wasn’t just a fake band just for that show,” explained the singer. “It was actually a thing I was doing at that point, but it just had to take a back seat. … It just was cost prohibitive for such a small project that it was at that point. It just took time to kind of catch up.”

As a reminder, Existential Reckoning can be pre-ordered here, while tickets to Puscifer’s “Live at Arcosanti” streaming concert can be purchased here. Read our full interview with Maynard James Keenan and Mat Mitchell here.