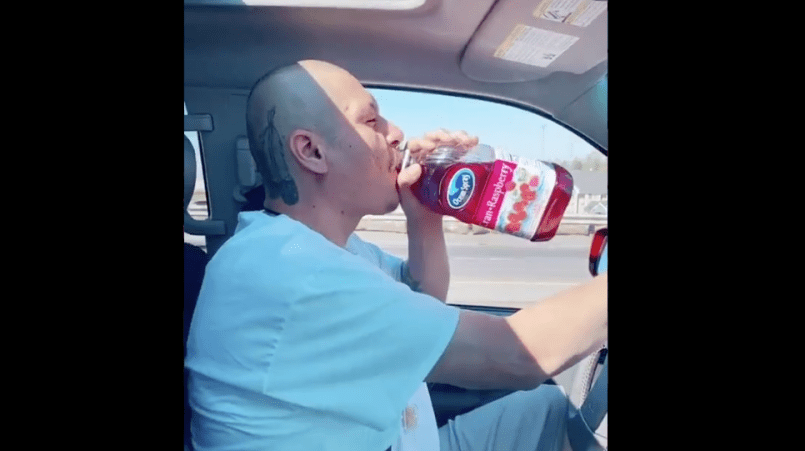 The feel good story of the fall keeps getting feel goodier. Nathan Apodaca, the TikTok user aka @420doggface208 who went viral with his skateboarding clip set to Fleetwood Mac’s “Dreams”, has been gifted a new truck full of cranberry juice from Ocean Spray.

If you missed it, the blissful video that made Apodaca Internet famous saw him gliding down the road, sipping from a bottle of Ocean Spray Cran-Raspberry juice, lipping along to “Dreams”. It turned out his car had broken down on his way to work, so he had to skateboard the rest of the way. Since the clip took off, he’s received over $10,000 in donations from fans, some of which he planned on putting towards fixing his ride.

Well, now he can just junk the thing and spend his money elsewhere, because Ocean Spray just handed him the keys to a brand new car. A rep from the drink company pulled up to Apodaca’s trailer and gave him a new Nissan truck with a bed filled of cran-ras juice. “Thanks for keeping it positive,” said the rep, well a message taped to the window read, “Good vibes only!” Of course, the whole thing was captured for social media, and you can watch it ahead.

Clearly stunned by the gift (he kept shaking and banging it, as if making sure it was real), a grateful Apodaca’s first drive in his new ride was to take it to the exact spot of the original viral video to recreate it in a whole new style. Check that out below.

Over the weekend, Mick Fleetwood showed appreciation for Apodaca’s video — and the resulting boom in sales and streams of “Dreams” — by joining TikTok and taking the #DreamsChallenge himself. Ocean Spray CEO Tom Hayes also got in on the fun, hoping on a skateboard and drinking his own product. That clip is below.

We loved the skateboard, but thought this set of wheels had a better sound system… Enjoy @doggface208! #dreamschallenge #cranberrydreams

Dreams really do come true! @doggface208 has inspired the world to take on the #dreamschallenge, even our CEO Tom Hayes! Are you in?

The CEO of Ocean Spray bought our boy a car! 🥺🥺 pic.twitter.com/WbcBF9S4wO