Trump Rally Turns Into Fyre Fest 2.0 After Thousands of People Are Stranded in the Cold 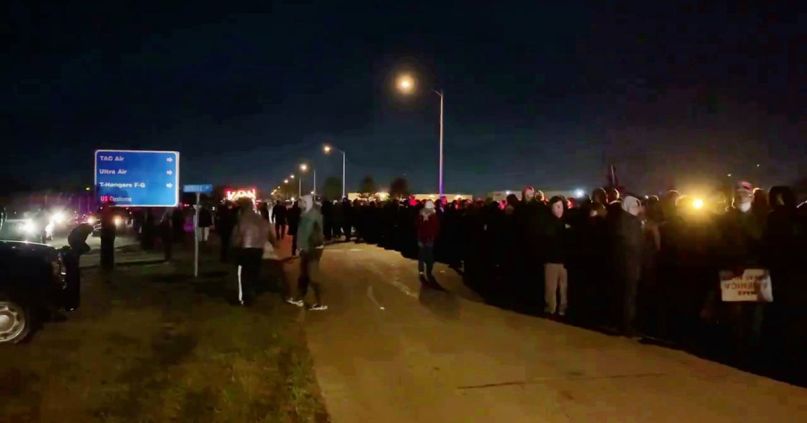 At least seven people were hospitalized, and 30 others were treated at the scene, after Trump supporters were stranded in the cold following a campaign rally in Omaha, Nebraska on Tuesday night.

In a scene that sounds like the political equivalent of Fyre Fest, thousands of Trump supporters waited outside of the venue for buses that never came. As temperatures plunged to the lows 30s, the crowd — including many elderly people — began walking to a parking lot located more than three miles away from the rally site.

Police officers and medical personnel on the scene subsequently responded to several individuals who struggled with the cold temperatures. There were also reports of individuals suffering seizures. Others became distressed by the chaos of the situation and were unable to remember where they parked their vehicles.

All told, at least 30 people, including the elderly, an electric wheelchair user, and a family with small children, required medical attention, according to NBC News. Seven individuals were transported to a local hospital for additional treatment.

The Washington Post reports that the crowds didn’t fully clear the rally site until after 12:30 a.m. local time — more than three and a half hours after Trump departed the grounds. A Trump spokesman said the campaign had provided enough buses, but that traffic on a two-lane road outside of the venue caused delays.

Wow. After Trump's rally tonight, he left thousands of supporters stranded in the blistering cold miles away from their cars. @omaha_scanner is currently reporting at least 30 patient contacts and 7 patient transports to the hospital. Elderly supporters were hit the hardest. pic.twitter.com/RnWy4ab4eq

The above video & this one were taken around 10:15pm. The #Trump rally ended around 8:45pm. Some just gave up and walked from the airfield, back to wherever they parked. It was about 32° out at the time. Many had already spent hours outside as they waited for POTUS to arrive. pic.twitter.com/JYXCLypTQl