Tyler, the Creator Names His Favorite Movies and Albums in New Interview with… Himself: Watch 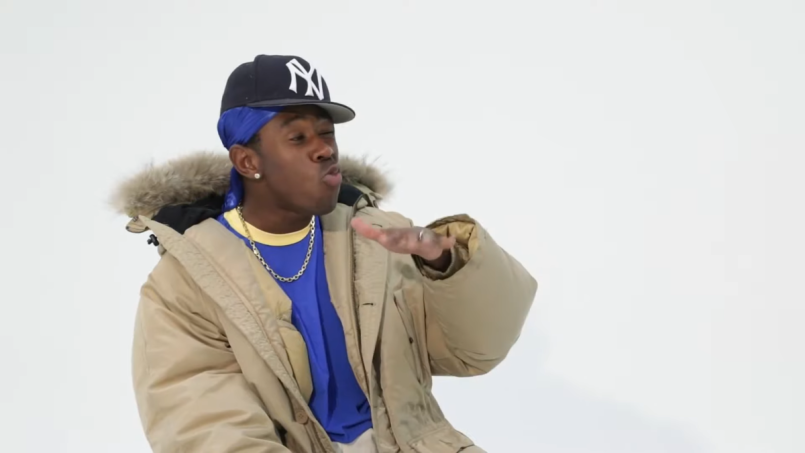 Tyler, the Creator has revealed his favorite movies, albums, and more during an interview with *checks notes* himself. The rap visionary shared his thoughts during a livestream for the Adobe MAX 2020 Creativity Conference, which was the perfect environment for Tyler to showcase his absurdist humor.

Throughout the video, he alternates between his normal self and an over-the-top, old school New York hip-hop head who teases him for his “eclectic” musical taste and begs him to cut the singing and go back to his gritty roots. That character is hilarious, but the “real” Tyler does give serious answers to most of the questions. For instance, his top three movies are Napoleon Dynamite, Scary Movie 2, and a toss-up between 20th Century Women or The Cat In The Hat. Makes sense.

When he asks himself to name his favorite albums, he names In Search of by N.E.R.D, the Marshall Mathers LP by Eminem, In My Mind by Pharrell, and Mama’s Gun by Erykah Badu, but he can’t come up with a fifth. Tyler also reveals the last meal he’d request if he were on death row (salmon with wasabi and eel sauce, and either pancakes or waffles), mentions that a monster truck would absolutely be included in his ultimate car collection, and picks Amy Winehouse and Michael Jackson if he could work with any artists, dead or alive.

Tyler also ranked his favorite places to visit outside of the US and revealed what advice he’d give to his 18-year-old self, but you’ll have to watch the whole video for that. Check it out below.

Since releasing last year’s “masterful” IGOR, Tyler has laid relatively low in 2020. Back in May, he delivered a fantastic verse on Freddie Gibbs’ Alfredo, and last month he starred in a new Gucci advertisement alongside Iggy Pop and ASAP Rocky.