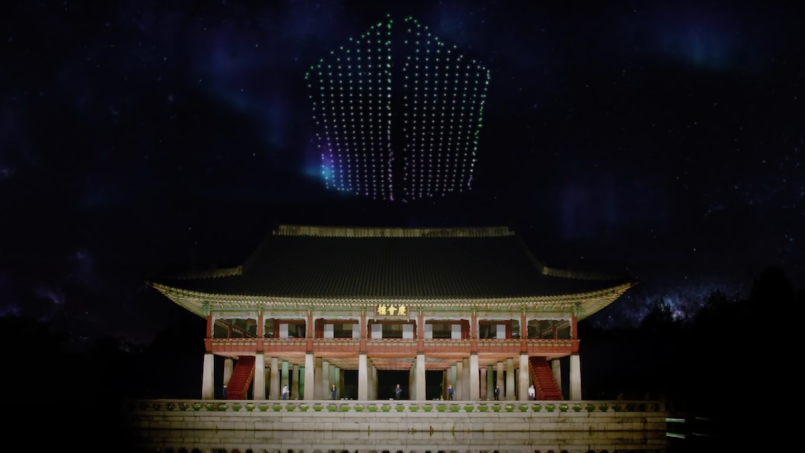 BTS and BTS ARMY logo on The Tonight Show

On the fourth night of their Tonight Show takeover, BTS sweetly paid tribute to their loyal fans in BTS ARMY.

The K-pop megastars returned to Gyeongbokgung Palace in Seoul, South Korea to deliver “Mikrokosmos”, from Map of the Soul: Persona. The song is often the last one on the group’s live setlists, and BTS performed it as though they were closing out a concert. Each member waved their arms from side to side, while others screamed out “Love you” into the imaginary BTS Army crowd. At the very end, glowing lights above the palace came together to form the BTS ARMY logo.

Elsewhere on Thursday’s episode, the Bangtan Boys played a game of Zoom Olympics with host Jimmy Fallon. One of the “events” involved popping their heads in and out from the screen like a Groundhog, while another tasked BTS with stacking large piles of TV remotes. It was a super silly sketch altogether, but the seven-piece boyband handled it with grace and plenty of smiles.

In case you missed out on this week’s earlier happenings, the BTS residency kicked off Monday with a “Dynamite” bang, followed by a “Home” sleepover performance on Tuesday. On Wednesday, BTS performed “Black Swan” while dancing amid the shrubbery of a dilapidated cathedral. They also sat down for an interview with Fallon.

“BTS Week” comes to an end Friday, October 2nd, and we’re expecting big surprises for this finale episode. This late-night takeover comes on the heels of BTS becoming the first all-South Korean group to ever top the Billboard Hot 100 chart. It’s also in anticipation of their new album, BE.