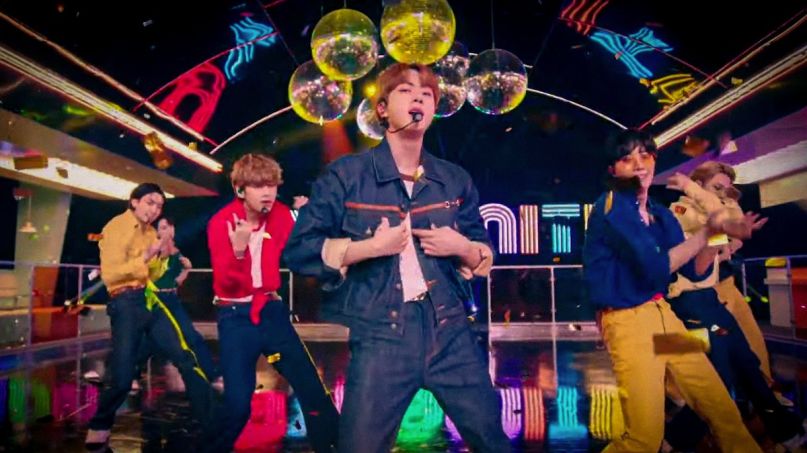 On Friday, BTS delivered the fifth and final night of their Tonight Show residency, and it was every bit as grand as you’d expect.

To close out the week, the beloved boyband aptly highlighted their hit single “Dynamite”. Since its release in late August, the track has already earned BTS a coveted spot in the history books: they are officially the first all-South Korean group to ever top the Billboard Hot 100 chart.

Inspired by the song’s throwback aesthetic, BTS presented a disco-themed performance, complete with strutting choreography and a handful of shimmering mirror balls. Toward the end of “Dynamite”, Jin, RM, Suga, J-Hope, V, Jimin, and Jungkook celebrated their successful late-night run by squeezing in a couple of minutes of fun rollerskating.

Last night’s episode also saw host Jimmy Fallon offer a send-off to his very special guests. “I wanted to take a moment and thank the band — not only for their interviews and the games — but every single night there’s been an incredible, spectacular, beautifully directed, choreographed, produced performance, and they’re raking up millions of views on YouTube,” he said. He also thanked the BTS Army, noting how they’re “the most loyal, positive and fun fans that you can ever dream of.”

Watch the videos down below.

From the very first episode on Monday to yesterday evening, “BTS Week” has been the gift that keeps on giving. The Bangtan Boys flaunted “Idol” while in front of Gyeongbokgung Palace in Seoul, held a “Home” sleepover party, and even took their fans to church for a “Black Swan” performance. As a sweet gesture, the K-pop megastars dedicated Thursday’s “Mikrokosmos” — often the closing song on their concert setlists — to their ever-loyal BTS ARMY.

The seven-piece also partook in a few non-musical bits, such as the “Dance Your Feelings” challenge and Zoom Olympics. Halfway through the week, BTS also served as lead guest and sat down for a short interview with Fallon.

Their Tonight Show takeover may be over now, but BTS are not quite done dominating 2020. The K-pop outfit is expected to release its third (!) album of the year, BE, on November 20th. BTS also just released their remix of “Savage Love” by Jason Derulo and Jawsh 685, which can be found at the bottom of this post.