"If we want to, we can come together, overcome our differences, and sort our shit out" 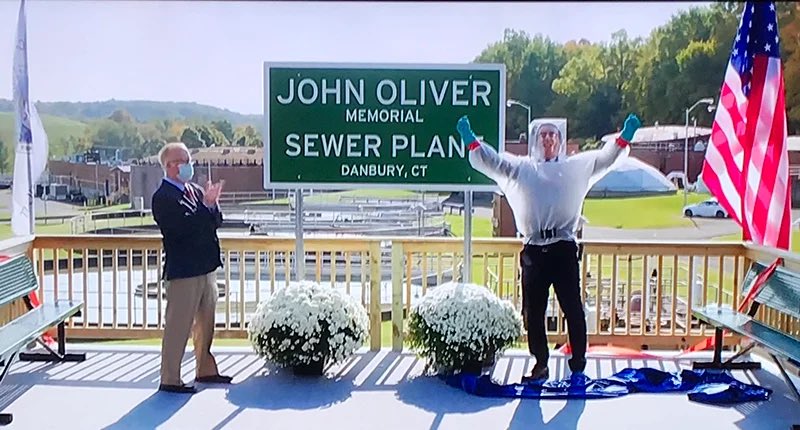 On his HBO talk show Last Week Tonight, Oliver has been mocking Danbury for months — “for no reason,” as he said — to the point where “To Danbury something up” became shorthand for making a mess of everything. But tensions escalated in August, when Oliver offered to personally beat up all the residents of Danbury. He said, “I know exactly three things about Danbury. USA Today ranked it the second-best city to live in in 2015, it was once the center of the American hat industry, and if you’re from there, you have a standing invite to come get a thrashing from John Oliver — children included — fuck you.”

On behalf 2015 ‘s second-best city, Mayor Doughton took offense to those words. In a video response, he (facetiously) offered to name the town’s sewage treatment facility after the comedian, “Because it’s full of crap, just like you, John.”

To Doughton’s apparent surprise, Oliver was delighted, making a big stink over the idea. He dared the town to take the plunge, even pledging $55,000 in charitable donations. Eventually, after a mildly contentious city town meeting, documented on the most recent episode of Last Week Tonight, the town agreed — with one condition. Oliver himself must journey 90 minutes to the dreaded New York City suburbs to attend the ribbon-cutting ceremony himself.

Oliver quickly acquiesced. On October 10th, he appeared in Danbury, dressed in an inflatable protective bubble, and walking with the grace of a plastic bag flailing in the breeze. His speech was funny and inspirational, transforming warm sewage into warm feelings. He said (via Danbury News-Times),

“There is a reason this sewer plant means so much to me, and that’s that it represents everything we need the most right now. Because think about it: This place takes the worst that humanity can produce, and transforms it into something that we can live with. And now more than ever, there’s something inspirational in that. Because at the end of this awful, awful year, what could be more important than evidence that, if we want to, we can come together, overcome our differences, and sort our shit out. Mr. Mayor, I could not be more proud to have my name on your shit sorter. Thank you, Danbury! You didn’t Danbury this up! None of us Danbury’d this up!”

Oliver summarized the events during last night’s episode of Last Week Tonight, which you can watch below.

For now, the shitty feelings between Oliver and Danbury have been wiped away. But fear not, fans of petty feuds: Last Week Tonight was recently renewed for three more seasons, and so Oliver has plenty of time to pick arbitrary fights with other municipalities. The renewal was an easy call for HBO. In September, the show won a fifth consecutive Emmy Award for Outstanding Variety Series.