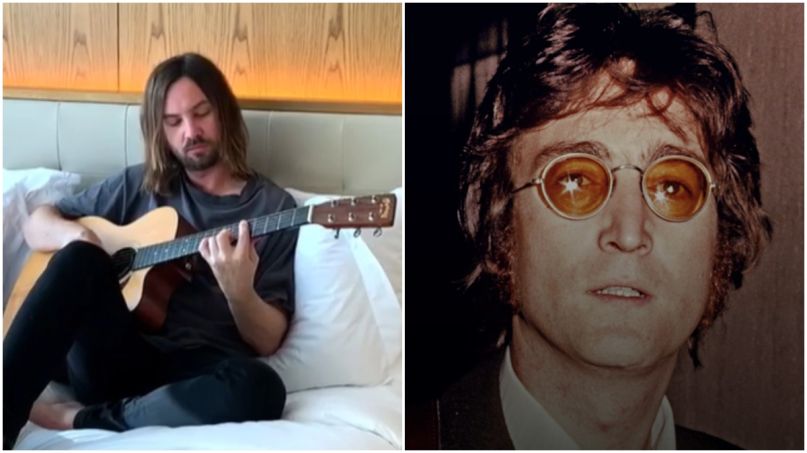 Today, October 9th, would have been John Lennon’s 80th birthday. As a tribute to the late Beatles legend, Tame Impala mastermind Kevin Parker has shared a bedroom cover of the iconic Imagine song “Jealous Guy”.

When we say bedroom cover we mean it quite literally. In a video posted to the Tame Impala Instagram account, Parker is seen singing and strumming along to the 1971 tune while lounging in his big comfy bed. In the original version of the song, Lennon’s vocals are bolstered by a full band’s worth of instruments, but Parker manages to translate the track’s timeless beauty with just his voice and an acoustic guitar.

Props to him for having a bedroom with surprisingly great natural reverb, because even though this was probably shot on an iPhone the sound quality is pretty great. Watch down below along with Lennon’s original.

In related news, Paul McCartney recently opened up about reconciling with Lennon in a new BBC documentary that aired last week called John Lennon at 80. “I always say to people, one of the great things for me was that after all The Beatles rubbish and all the arguing and the business, you know, business differences really… that even after all of that, I’m so happy that I got it back together with your dad,” McCartney recalled to Sean, who conducted a series of interviews with his father’s friends, family, and colleagues for the special doc.

“It really, really would have been a heartache to me if we hadn’t have reunited,” Macca added. “It was so lovely too that we did, and it really gives me sort of strength to know that.”

Today also marks the release of a John Lennon deluxe box set called Gimme Some Truth, which features many of his most beloved solo songs remixed from scratch.

On the Tame Impala front, the band played 2012’s “Elephant” and The Slow Rush single “Is It True” in an empty soccer stadium last week to celebrate the release of new video game FIFA 21.