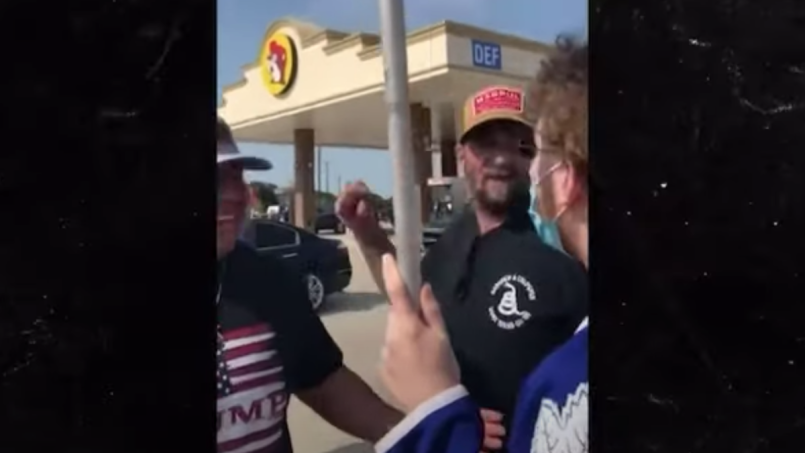 Pro-Trump supporter Jason Lata has been charged with assault after punching someone at an anti-Trump rally in Texas over the weekend. What provoked the 44-year-old Lata to physically lash out? Apparently the repeated playing of the YG song “FDT (Fuck Donald Trump)”.

As TMZ reports, the altercation took place at an anti-Trump rally on Saturday held outside of Buc-ee’s convenience store in Denton, about an hour north of Dallas. According to a viral video of the incident, Lata approached the unidentified victim and demanded he turn off “FDT”, which was blaring in the background. A second Trumper added, “You shouldn’t even be here, bud.”

When the protestors declined Lata’s requests, the snowflake then needlessly escalated the entire situation. “I’ll fuck you up,” Lata can be heard threatening the anti-Trumper, right before punching him in the face, causing him to fall over. “Get up, motherfucker!” Lata continued to goad the victim. Local police were then called as those at the rally attempted to get things under control.

The unidentified victim sustained an abrasion under his right eyebrow and a broken tooth, per Denton police officials. The 44-year-old Lata has since been arrested and charged with assault causing bodily injury.

Texas has historically voted Republican for decades; no Democrat has won the state since Jimmy Carter in 1976. However, recent polling suggests Joe Biden has made significant strides in catching up with Trump.

The altercation comes just days after Trump tested positive for COVID-19. Trump, who has notably downplayed the coronavirus for months, was taken to Walter Reed Military Medical Center for treatment.

Watch the viral video below.

The suspect in today’s assault has been identified and detectives are in the process of obtaining a warrant for his arrest. He was not on scene when officers arrived on the initial call, and he is not a resident of Denton. We will update when he is in custody.

UPDATE | The suspect in today’s assault is in custody. Jason Lata, 44, was arrested after Denton PD detectives obtained an arrest warrant for assault causes bodily injury. Lata is currently in the City of Denton Jail. Bail is set at $15,000. https://t.co/WaLhuINTvz