"The hardest part was not so much him passing ... the worst part is the decline." 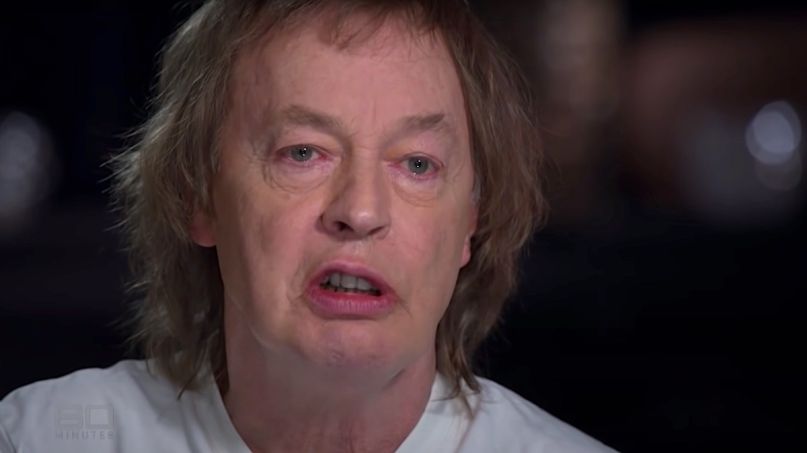 AC/DC’s Angus Young has been steady as a rock throughout his career, even in the face of tragedy. However, in a new television interview, the guitar icon displayed a rare show of emotion as his eyes welled up while discussing his late brother Malcolm Young’s battle with dementia.

The legendary rock band has soldiered on despite a number of high-profile tragedies and setbacks. When singer Bon Scott died in early 1980, AC/DC recruited Brian Johnson just a couple months later and recorded one of the greatest rock albums of all time, Back in Black. When Malcolm had to exit the band as his bout with dementia began, the brothers’ nephew Stevie Young stepped in to play rhythm guitar. And when Johnson was faced with serious hearing issues, the Rock & Roll Hall of Fame act tapped Axl Rose to finish their “Rock or Bust” tour.

Now, AC/DC are back with their critically acclaimed new album, Power Up, featuring the return of Johnson, drummer Phil Rudd, and bassist Cliff Williams. While Angus and Brian were discussing the new LP with the Australian edition of 60 Minutes, the topic turned to Malcolm’s dementia battle and eventual passing in 2017.

“I think the hardest part was not so much him passing, because that was a kind of end, a relief,” said Angus of Malcolm’s final years. “I think the worst part is the decline — that’s the hard part. Because of how you knew him, and then to see that that was gone.”

As his eyes became teary, Angus continued, “I would say, even to the end, if I was there … he had a big smile. And for me, that always gave me a kind of joy. Even though he was in that state, that was always the joy of it. And he still got a great kick if I played him guitar. He would try to tap his foot. But he always knew I was there. So that was a big thing. I was with him towards the end.”

Johnson added, “It was very emotional when [Malcolm passed]. It’s all too soon, isn’t it? Too quick, and too soon.”

AC/DC released their new album, Power Up, last week, with our own review calling it their best effort since 1990’s The Razors Edge. The music for every song on the album is credited to both Angus and Malcolm, with the former utilizing unused riffs that the brothers had written together in the past.

Pick up the new album here, and watch Angus Young and Brian Johnson on the Australian edition of 60 Minutes below.