"Look around you, you under-baked gingerbread boy." 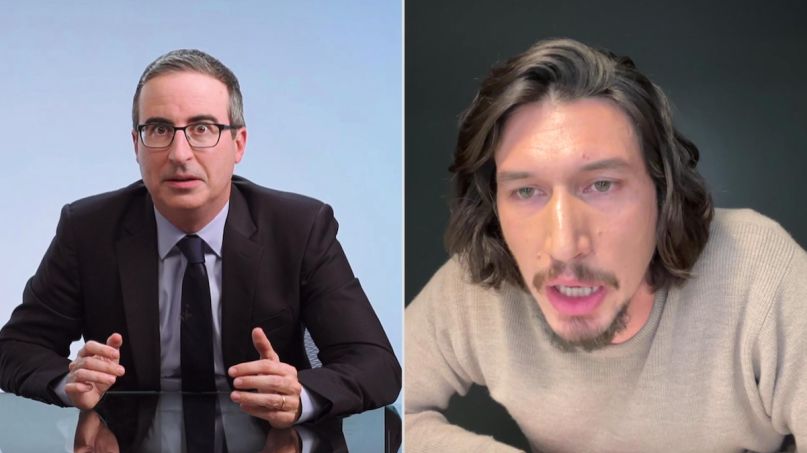 Over the course of Last Week Tonight’s seventh season, Oliver maintained a bit where he’d salivate over Driver in increasingly aggressive, ribald ways. He’d find ways to interject stories with extraneous solicitations for the Star Wars actor to “crush my rib cage, you load-bearing behemoth” or “choke slam me to hell, you nasty shed.” The HBO host would also referred to him as everything from an “irredeemable steer” to a “relentless hillock.” It was all as disturbing as it was hilarious, and it came to a head when Drive actually FaceTimed Oliver on last night’s season finale.

Driver wasn’t there to sneeze into Oliver’s McFlurry, but to instead question the “deeply weird, small, small thing” over his obsession. “When you first started doing [this bit], it was easy for me to shrug it off,” said Driver, before Oliver interrupted with, “Especially with those shoulders, I bet… Bet you could shrug a whole planet with those meat peaks.”

“Stop talking,” Driver demanded before running down a list of all the masochistic requests Oliver had made over the last year:

“Do you realize, over this past year, what you’ve asked me to do to you? ‘Collapse on your chest.’ ‘Tie your fingers in a square knot.’ ‘Step on your throat.’ ‘Shatter your knees.’ ‘Pull your heart out through your ear.’ What’s wrong with you? You realize we’re strangers, right? I don’t know you. And now random people on the Internet ‘stan’ us, claiming that you ‘thirsting’ over me is ‘a mood.’ I’m sick of people stopping me on the street and asking me if I’m going to punch a hole in you like a Marriage Story wall.”

Oliver eventually apologized for “having some weird fun” and promised to put a stop to his strange fixation. “I’m truly, truly sorry,” he conceded. “Consider this bit over. It’s done.”

In the end though, Oliver’s dream did actually come true. When Driver suggested he get up and explore the “void” from which Oliver has been hosting Last Week Tonight since the pandemic, Oliver wanted to know if that was an order. “Explore the fucking space, you hollow-boned Mr. Bean cosplayer,” replied Driver. “Look around you, you under-baked gingerbread boy.”

This may just be Oliver’s biggest win of 2020, edging out convincing the town of Danbury, Connecticut to name their new sewage plant after him. There will surely be plenty more oddness coming from Oliver, as HBO recently renewed Last Week Tonight for three more seasons.