"I just felt like a parody of myself," the 18-year-old Eilish admits

by Nina Corcoran and Wren Graves 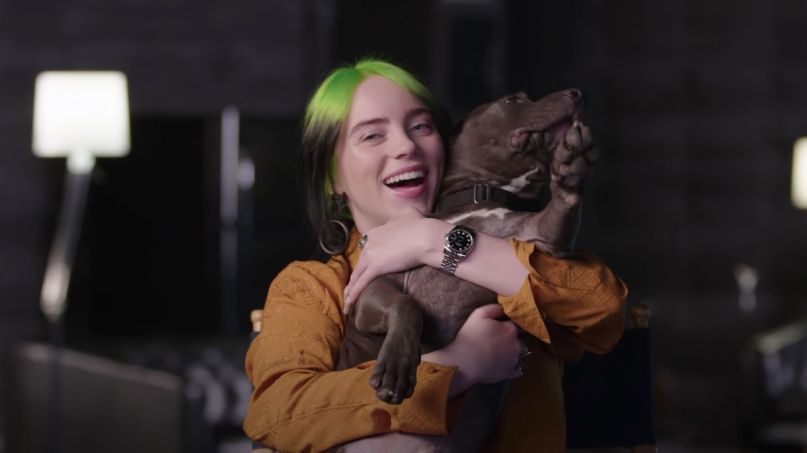 Back in 2017, when only a handful of outlets knew she would become a breakout star, Billie Eilish stopped by Vanity Fair for a video interview. Since then, they’ve invited her back each year to answer the same questions and see how she’s changed — and the 2020 installment of “Time Capsule” might be the best yet, as it sees Eilish touching on her identity crisis, new music she has yet to release, and everything in between.

The 27-minute-long video places Eilish’s annual answers side-by-side for easy comparison. The big takeaways? She never wants to stop performing live, and living through a global pandemic where the safest option is staying home has made her all the more aware of that. “I never thought I wouldn’t be able to do shows someday. It’s the one thing I feel like I’ve ever been good at,” she said. “When shows are allowed again, every show is going to be the best show.”

That might seem like the kind of thing any artist would say, but Eilish hadn’t felt that way before COVID hit. In fact, she had been having an “identity crisis”, with bizarre out-of-body experiences where she “felt like I was pretending to be Billie Eilish.” She explained,

“For a while now, I’ve been really having an identity crisis a little. I think it was December, I did some radio show performance , and the entire show I felt like I was pretending to be Billie Eilish. Like, I felt — I completely wasn’t looking at myself as myself. I was totally seeing it from not-my-own perspective and it was so weird. Happened multiple times at award shows and whatever. I felt like a parody of myself.”

She added that she’s “felt a little better about it lately,” and reminded fans that she’s “literally 18,” and still figuring things out. “I’m trying different ways of living and styles and personalities and hairstyles and clothing and shoes — I’m just trying it all out because I’m a growing fucking girl.”

While holed up indoors, Eilish also wrote 16 new songs with her brother Finneas O’Connell — which we got a taste of with her latest track, “Therefore I Am” — and apparently she adores them all equally. “I have made and created things that I don’t think I would have ever created,” she said of the tracks. Most likely, they will be part of her follow-up release to her 2019 album When We All Fall Asleep, Where Do We Go?.

Eilish also used the time off to get involved in various activist efforts, something she said she hopes to do more of even when life goes back to normal. “I learned so much more about the way people are living that I wasn’t aware of before. The climate crisis and social injustice and all the bad things made me think differently,” she said. “I will never stop fighting for all the black and brown people who have lost their lives to police brutality.”

It’s pretty wild that Vanity Fair has been able to keep interviewing Eilish on the same day each year ever since she was a 15-year-old. Even now, at age 18, Eilish seems to have so much ahead of her despite already having so much experience under her belt. It’s a heavy burden to carry by yourself, but by the sound of it, Eilish is slowly figuring out how to juggle her role as a pop culture icon — in part thanks to some helpful career advice about “the shit of it and the amazing parts of it” from Justin Bieber, Ariana Grande, and Katy Perry.

“Getting bigger and bigger makes me more comfortable about not having to prove myself,” said Eilish. “People look up to you so that you will tell them what you, yourself, would actually tell them.”

All told, it’s a pretty human look at how a person evolves over the years. Of course, Eilish is a larger-than-life musician at this point, so it also captures the real-time changes, opinions, and feelings that occur behind the scenes with celebrities — particularly those who get famous when they’re young. Watching this latest version begs the question: will Eilish continue doing this interview series when she’s older? Apparently so. “I’m doing this shit until I’m 90,” she jokes, “so get ready for that.” Watch the full video below.