The K-pop kings will face off against Lady Gaga, Ariana Grande, and Justin Bieber in the Best Pop Duo/Group Performance category 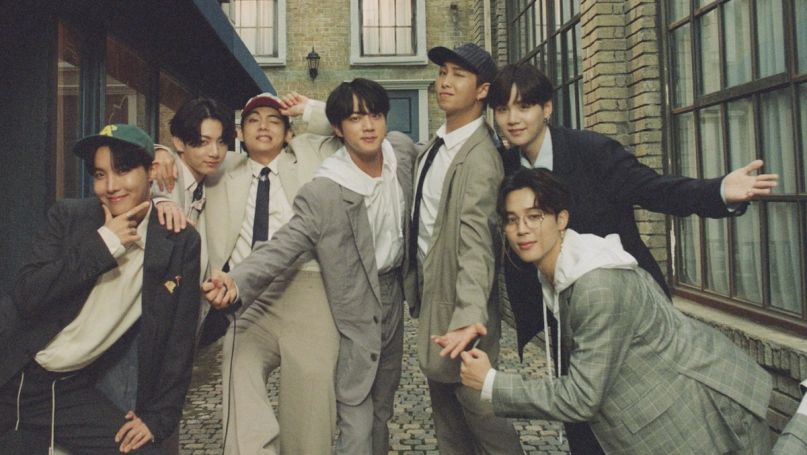 Nominations for the 2021 Grammy Awards were revealed on Tuesday, and BTS have scored themselves a big one: Best Pop Duo/Group Performance for “Dynamite”. This marks their first music-focused Grammy nomination, and their second overall following a Best Recording Package nod in 2019 for their album Love Yourself: Tear. Additionally, it marks the first-ever performance Grammy nomination for a K-pop group.

The septet — that’s J-Hope, Jimin, Jin, Jungkook, V, RM, and Suga — is set to face off against a category stacked with pop royalty. The other contenders include “Rain on Me” by Lady Gaga and Ariana Grande; “UN DIA” by Bad Bunny, Dua Lipa, and J Balvin; “Intentions” from Justin Bieber and Quavo; and “Exile” by Taylor Swift and Bon Iver.

“Dynamite”, the lead single off new album BE, quickly broke records upon its release in late August. The explosive tune topped the Billboard Hot 100 rankings, making BTS the first all-South Korean group to ever accomplish such a feat. The English-language track was also BTS’s first song to snag the Hot 100’s No. 1 spot.

Despite being one of the most popular songs in the universe, “Dynamite” was shut out of both the Song of the Year and Record of the Year categories. Even so, BTS are looking forward to adding a prized Grammy trophy to their awards collection.

“We would like to be nominated and possibly get an award,” BTS member RM recently told Esquire. “I think the Grammys are the last part, like the final part of the whole American journey. So yeah, we’ll see.”

Revisit “Dynamite” down below. The 2021 Grammy Awards will take place on Sunday, January 31st and will be hosted by The Daily Show anchor Trevor Noah. Due to the ongoing pandemic, it remains to be seen whether the ceremony will take place in a live capacity with an audience.

For more of the beloved K-pop kings, check out their first-ever live performance of “Life Goes On” at the 2020 American Music Awards this past weekend. BTS also appeared on The Late Late Show last night.