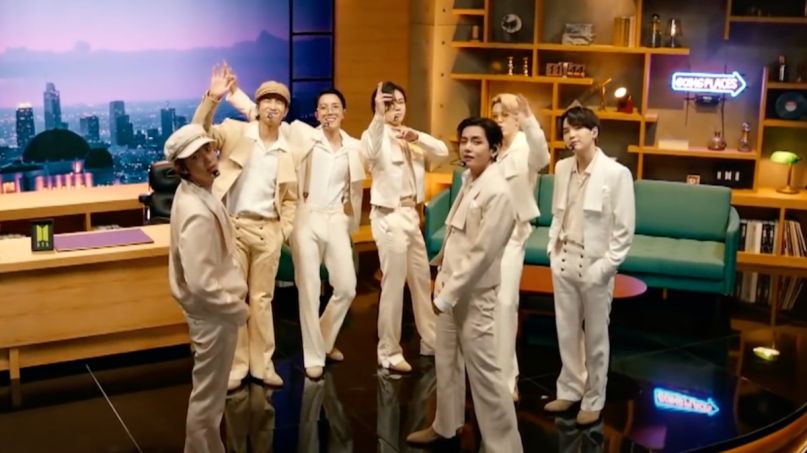 Fresh off their first musical Grammy nod, the superstar K-pop group BTS dialed in to The Late Late Show with James Corden to discuss the Grammy Awards and perform their newly-nominated song “Dynamite”.

Despite Corden’s introduction touting their “first ever Grammy nomination,” the Bangtan Boys had previously been up for Best Recording Package in 2019 for their album Love Yourself: Tear. But this is the first time that J-Hope, Jimin, Jin, Jungkook, V, RM, and Suga were recognized for their musical contributions, and they certainly seemed excited. Corden showed a video of the members watching as their name was called, complete with hooting, clapping, and jumping off the couch. But one member, V, merely sat there in shock. As he explained, “The reactions were different for each member. In my case, I just couldn’t believe it.”

J-Hope added, “”Actually, I’m not in the video because I was sleeping. So I cried when I woke up.”

It fell to RM, the most fluent English speaker, to thank the Recording Academy and fans. He said,

“First of all, we’re truly honored and we know this is a huge step and a milestone, not only for us but for the music industry. It makes us even happier to know how proud our fans must be right now, and it feels like our hard work has finally kind of paid off. Since we’re nominated, if we can get a win too, that would be really amazing — greatest honor that we could ever have. And what else can we say? Call us and we’re ready for the stage, anything.”

BTS then performed the global smash “Dynamite”, and while they couldn’t be in the CBS studios with Corden, the studio came to them. The song started with a cozy Christmas scene, switched to a playful walk down a hallway, and launched to the next level when that “hallway” was revealed to be a semi truck inside a cavernous airplane hangar. All that extra space provided plenty of room for dance moves, but the group had a few tricks left. At the end, they emerged onto a stage mocked up to be a nearly-exact replica of The Late Late Show’s set. Check it out below.

“Dynamite” is the lead single from BTS’ new album BE. Last weekend, the group performed “Life Goes On” for the first time live at the 2020 American Music Awards, and earlier this week they played the song again during another appearance on The Late Late Show.