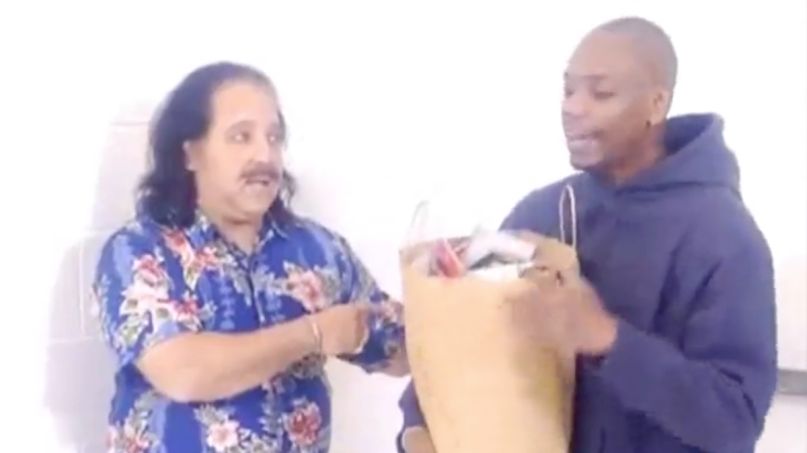 At the top of the month, all three seasons of Chappelle’s Show made their way to Netflix and HBO Max. However, fans of Dave Chappelle’s legendary sketch program quickly noticed that one of the show’s 28 episodes was missing. According to The Daily Beast, Season 2’s sixth episode, “The Internet & Moment in the Life of Lil Jon”, was indeed left off of the streaming services because of a cameo from former adult film star Ron Jeremy.

The episode in question finds Chappelle envisioning what the Internet would be like if it were a physical location like a mall. After raiding the “Free Downloads” store for music, he meets Jeremy, who invites him into the world of pornography.

The trouble is that Jeremy, who moonlights as a standup comic and reality TV presence, was recently charged with over 20 accounts of sexual assault. The allegations range forcible rape and lewd conduct to forcible penetration by a foreign object, with victims between 15 and 46 years old. Jeremy pleaded not guilty, but faces a maximum sentence of over 330 years in prison if convicted on all charges.

Understandably, you wouldn’t want to be promoting someone with that sort of despicable rap sheet. ViacomCBS, the parent company of Comedy Central, reportedly considered this, and thus didn’t even include the Chappelle’s Show episode in its contracts with Netflix and HBO Max. Both services were notified that “the episode was excluded from the licensing deals altogether due to standards and practices.”

Still, “The Internet & Moment in the Life of Lil Jon” can be watched via YouTube and Amazon’s pay-for-stream platforms. It is not, however, available on CBS All Access.

Jeremy is next scheduled to appear in court on December 14th. Chappelle, meanwhile, is prepping to host the first post-election episode of Saturday Night Live this weekend.

Perhaps ironically, Chappelle gave a platform to Louis C.K., someone who has confessed to their own sexual misconduct, during a socially distant stand-up show in Ohio over the summer.