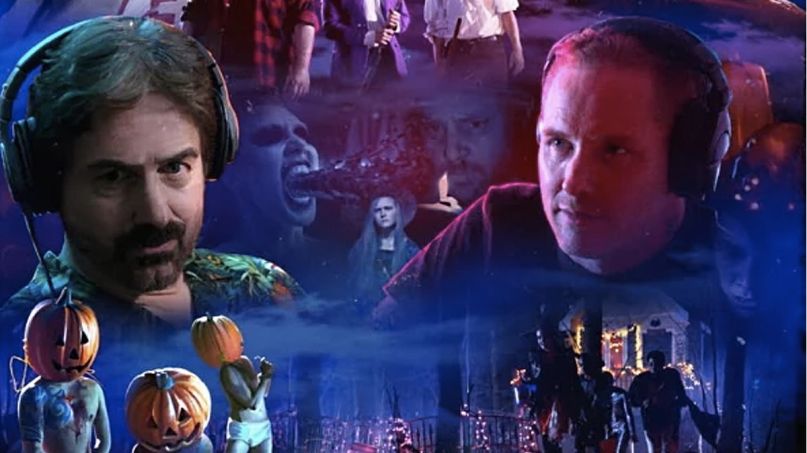 Longtime horror cinephile Corey Taylor has filmed a starring role in the upcoming movie Bad Candy alongside Zach Galligan of Gremlins fame. In addition to discussing the film, Taylor hinted in a separate interview that Slipknot could release their next album in 2021.

The movie is structured in the classic horror anthology format. Taylor plays a radio DJ who weaves scary stories to his listeners — a task well-suited for the voice of Slipknot — with his co-host (played by Galligan). In a Creepshow-inspired twist, the stories come to life in graphic reenactments that owe much to the great horror films of yore such as Halloween and, of course, Gremlins.

“It’s a pretty cool little horror movie that has a linear story going through it, but it’s really kind of made up of different short stories,” Taylor explained in an interview with FirstGlance Film Festivals (via Blabbermouth]. “It’s basically re-enactments of the stories that I’m actually telling on the radio … I got to work with Zach Galligan, which was really rad. I was a big fan of his work when I was growing up, and getting to work with him and meet him, he’s just such a cool dude that it just made it easy. We were there for two full days really kind of mapping out and filming everything. And we just rolled with it, man. We just had as much fun as we could, just making fun of each other.”

As for how Taylor got involved in the project: “It was a small-budget film done by some people who knew my manager, and who had worked with him before. And they asked if I wanted to be a part of it, and I was, like, ‘Yeah, of course. I’m totally down.'”

It’s not Taylor’s only foray into horror films. He stars in another upcoming film, Rucker, about a serial killer trucker, which is currently in post-production. Taylor also wrote a horror script of his own and is directing the as-yet-untitled film.

The ever-busy Taylor recently released his debut solo album, CMFT, which included a high-production livestream — cinematic in its own right — and a secret, socially distant show to 12 people for the Sweet Relief charity.

Meanwhile, it appears Slipknot is in the early stages of their follow-up to 2019’s We Are Not Your Kind. Clown recently divulged that the band had gathered to write new music. Taylor seemed to second that by stating that the another album could arrive in 2021.

In an interview with “Good Company with Bowling”, Taylor said, “The plan right now with Slipknot is to try and A: finish up the touring next year; and B: we’re thinking about kind of putting another album out maybe next year. But I don’t know. I don’t know what the plan is yet. I just know that we all kind of feel like there’s unfinished business and we wanna finish that out before we do anything. But I know that we were talking about doing it, ’cause we only have one album left on our contract [with label Roadrunner].”

It’s also possible that Taylor is hinting at finishing Slipknot’s shelved “Look Outside Your Window” project, which was recorded during the sessions for 2008’s All Hope Is Gone.

Listen to both interviews with Taylor and check out the trailer and movie poster for Bad Candy below. According to IMDB, the movie is slated for release on September 6th, 2021.