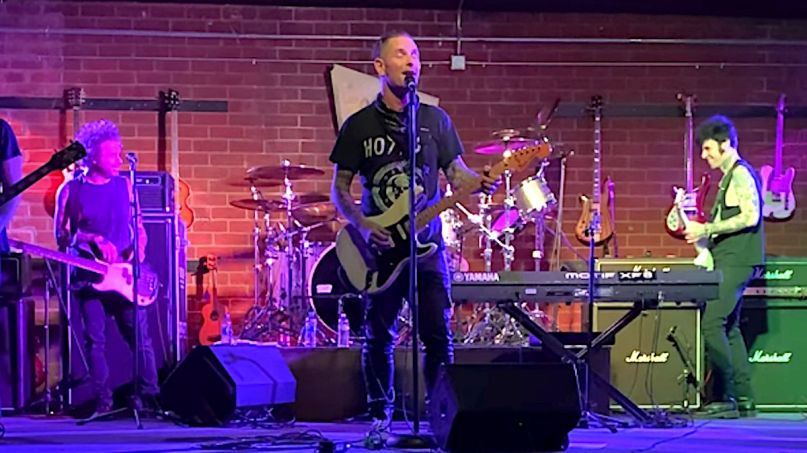 It appears the secret show took place in a small dive bar, and pictures of the event look more like a sparsely attended open-mic night rather that a show for a multiplatinum recording artist. Still, Taylor called the experience “unbelievable,” and with live music still on pause for the most part as the pandemic worsens, it’s about as safe as an in-person concert can get.

“Unbelievable feeling being back in front of a crowd, even if it was only 12 people!” Taylor posted on Instagram. “Last week’s socially distanced secret show in LA was a blast. We played live music again and raised money for @sweetreliefmusiciansfund. Thanks to everyone who donated and thanks to our winners who made it out for the special night.”

Taylor recently released a solo album, CMFT, and also been outspoken about taking precautions and encouraging fans to do the same during the pandemic. Months ago, Taylor hinted that it would take a while before people would feel safe going to shows again but predicted an “explosion of live entertainment” when concerts did return.

Last month, Taylor celebrated the release of his debut solo LP with a virtual cinematic concert event, which was filmed at The Forum arena in Los Angeles.

If the singer from Slipknot performing to 12 people sounds depressing, it is progress, as the live music industry grapples with how to proceed if and when a vaccine becomes widely available.

In other Slipknot-related news, members of the band recently got together to write new music for the follow up to 2019’s We Are Not Your Kind. When asked if the pandemic and current events could influence the new record, percussionist Shawn “Clown” Crahan said that the lyrics are up to Taylor, but suspected that “anything that affects him and affects us and affects you will be included.”

Meanwhile, Taylor’s look-alike son Griffin is also staying busy with his own band Vended, who made their live debut earlier this year and appeared on Knotfest’s “Pulse of the Maggots Festival” over the weekend. The streaming underground metal fest featured 20 upstart metal bands, Vended included.

Watch clips from Taylor’s socially distanced show and of his son’s band Vended below.