"You reflect your times and the emotion in the band" 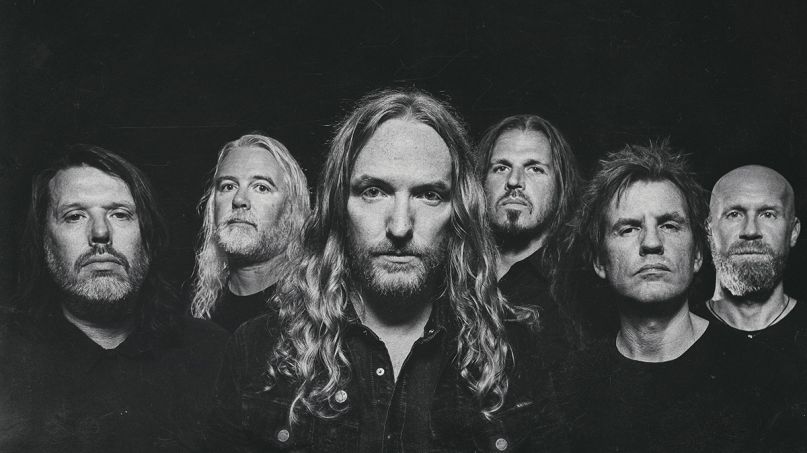 Dark Tranquillity have experienced a different 2020 than most bands. The Swedish melodic death metal pioneers spent most of the year recording their 12th album, Moment (out today), as they watched the world cope with the devastation of COVID-19 from the confines of their recording studio.

The band’s homeland of Sweden has taken a highly controversial approach to lockdown and mandates by avoiding them altogether. Instead, the country trusted its citizens to take the necessary precautions as the first wave of the virus spread throughout the world earlier this year. As frontman Mikael Stanne tells it, despite the surrounding European travel bans, the Swedish went about their lives with relative normality compared to other countries. That might change as case counts increase across Sweden, which is being rocked harder by a second wave of infections.


As the band continued work on Moment, the tumultuous state of the outside world couldn’t be ignored. When Stanne interacted with friends and colleagues in different places, he saw the suffering and isolation they were going through. While he states that much of Moment was written pre-pandemic, the emotions surrounding the past months have been captured in the recordings.

As it stands, Moment is likely one of the few metal albums recorded during the pandemic that wasn’t made under stringent social distancing or quarantine guidelines. Instead of having to institute biohazard measures in the studio, the band members worked together, and that communal energy is palpable on Moment. With the addition of guitarists Christopher Amott (ex-Arch Enemy) and Johan Reinholdz, Dark Tranquillity’s music continues to swirl and soar with a brightness that belies the misanthropic connotations often associated with death metal.

Now that the highly anticipated Moment has arrived, Heavy Consequence caught up with Stanne to discuss the making of the album, observing the pandemic from Sweden, the band’s livestream release show, and more. For contextual clarity, this interview was conducted in early November, just prior to the recent surge in COVID-19 cases in Sweden.

We’re staying very busy. This year has been a lot of studio work, promotion, videos, a lot of that stuff. It feels weird knowing there will be no tours. A huge emptiness awaits us. But other than that, we’re doing good.

As you probably know, Sweden is treating this very differently from other countries. It’s very relaxed when it comes to rules and regulations and mandates. People are very careful but it’s not like we’re not allowed to go out. There’s a lot of freedom still, which makes it so much easier. We’ve been self-isolating in the studio, basically.

On the title “Moment” and what it represents, especially in 2020

Moment was a working title for the longest time. It was something we hadn’t decided on, but once this happened, it became very obvious there was no other title that would work right now.

I wanted something to unify the lyrics. My idea was to write about how we got here, why we are where we are in the world right now and how weird it looks. Trying to figure out — on a personal level — what makes us choose certain things: What about our background, our history, our education, and our upbringing leads us to the decisions we make. Why we choose the different paths that we go down in life. “Where did it all go wrong?” [laughs]. That kind of thing.

I’ve felt incredibly frustrated with what I see and hear and read. I’m trying to figure it out for myself, or at least write it down and scream about it so that it makes things easier. The moments when the past meets the future — that’s the general idea. I wrote about how we deal with loss, how we deal with big changes in life, how we deal with all this information…and what to do with it. Do you discard it because it’s something you don’t want and it’s uncomfortable? Or do you embrace it?

It became super weird, of course, when the pandemic hit and we were in the studio. All this stuff was basically written, but it became very, very real. All the worst sides of people and humanity were on display in the world. You could see it everywhere, from my neighbors to what I saw on the news from the rest of the world. It really had an impact on me, and I decided to rewrite some of the lyrics so that it matched a little bit more or a little less, so it was less obvious. Because sometimes it felt a bit too much on the nose for what was happening in the world at the time.

Who knows how much the album process changed because of all this? It was definitely felt and something being talked about constantly in the studio, trying to reconcile it and understand. … Unconsciously, I think it’s there. What would it have sounded like if this were just a normal year or if we’d recorded last year? It would have been kinda different. Not that there were any conscious choices to make it sound a certain way. You reflect your times and the emotion in the band and the feeling you have. You try to be honest about it and have that influence your performances — in any case. Of course, this was a very different time.

On releasing Moment without the ability to tour

We pushed the release date up to early fall so it could coincide with an American tour, and that didn’t happen. So we spent some more time in the studio, which was good. Then we talked to the label, we were like, “Do we release it anyway?” They said, “It’s up to you.” We said we wanted to get it out. It would be too frustrating and torture for us to just sit on an album and wait ’til things clear up. It doesn’t make any sense. I’m frustrated with bands that have done that because I want music. I need it. I’m stuck here at home, I just want to listen to new cool records.

It feels super weird. We usually start on the day of release with a show in New York City, and that’s where we kick off the touring. Now that won’t happen, so we need to figure out something else. We’re doing a livestream show the day after release [November 21st]. We’re going to treat it as if this was the first show, a full production with all of our crew flying in from Portugal, to make sure it feels like we’re starting a tour. We’ve been rehearsing like crazy, and everybody is excited. We’re going to play the entire album for the first time…and maybe the last. When the second show of the tour will happen, we don’t know.

They’ve been touring with us for three years, so of course we knew they are incredible guitarists. We had a fantastic time together. Once we came off the road early last year, we decided to focus on writing. We felt like, “OK, we still need to be cautious and make sure we maintain the sound that we have built over 30 years.” But also incorporate these new amazing guitar players and make sure it is different and moving forward. [Bassist] Anders [Iwers] starting writing a bunch of songs, Martin Brändström wrote a few. The three of us worked in the studio to outline what we had in mind, what felt right — a continuation and refinement of what we did on Atoma.

We thought, “We’re onto something.” Then we sent it to the [Amott and Reinholdz] so that we could start working together on it. Johan changed a lot. He started working on the songs immediately to make it apart of what he wanted to do. And sometimes that went too far, because he comes from a different background. But we had a lot of time to experiment back and forth: We’ll send him a song, and he’ll record a new version of it, which is totally different than what we had in mind, still fantastic but not Dark Tranquillity anymore. So we’d take it back, change a few things — back and forth five or six times — and all of the sudden, we’re there. It started to feel good. Johan was instrumental in shaping how the album would end up guitar-wise. He wrote a few songs, as well, that we made into Dark Tranquillity songs through Martin being very much a producer this time around. Chris [Amott] focused more on leads and solos where Johan is more the rhythm guitar guy and also solos.

It was a learning experience, we got to know each other musically in a different way. It opened up new ways of working together, and we realized a lot of things about how we write music and how we think about our songs. I’m already excited on working even more closely together for the next album, whenever that happens. It was a great, creative collaboration that kept getting better the more we understood each other.

On staying creative and inspired in times of isolation

Everybody is anxious to do something and they’re restless. Personally, I’ve started working with a lot of other artists and friends to record something — cool weird projects that we would normally never do. Whenever I get approached about stuff like that, I’m usually like, “Ahh, there’s no way I have the time.” But now that I do, might as well. This year is gonna be like…20 years from now you’re going to look back on all the weird bands and collaborations and strange albums that were written and recorded this year and the next. Just because everybody is so frustrated. You might as well hide away in the studio and just write. It terms of creativity, I’m lucky to have that — something to focus on and not think about not working.

Thanks to Mikael Stanne for taking the time to speak with us. You can stream Moment below and purchase the album via Amazon. Get tickets to the band’s November 21st virtual release show via Dark Tranquillity’s website.