Dave Chappelle: “You Have No Problem Wearing Them at the Klan Rally, Wear Them to Walmart Too” 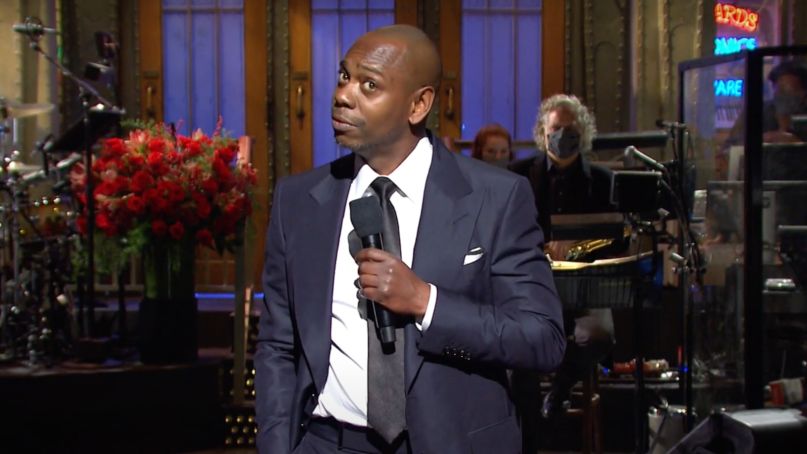 Nearly four years to the day of his first time hosting Saturday Night Live, Dave Chappelle returned to Studio 8H to once again headline the sketch comedy show’s post-election episode. As to be expected, the comedian’s opening monologue proved to be the highlight of the evening.

Chappelle began his monologue by noting how the events of the day had him reminiscing about his great-grandfather — a former slave who taught himself how to read and who then committed himself to a life of education, civil rights, and religion.

As news of Biden’s victory spread across the globe, Chappelle said he heard from a friend in London who thought the world would be a “safer place now that America has a new president.” But Chappelle cautioned the SNL audience not to get too ahead of themselves: “Do you guys remember what life was like before COVID? It was a mass shooting every week. … Thank god for COVID. Something had to lock these murderous whites up, keep them in the house.”

Chappelle also discussed his quarantine standup series, which he’s been holding in the cornfields of Ohio. He revealed that some local town residents complained about the shows being too noisy. He said, “They had a whole Zoom meeting about me” and complained about how their “kids are trying to sleep and all they hear is the n-word. I said, ‘Was I saying it or were you?'”

But Chappelle saved his most provocative comments of the night for white people who refuse to wear masks. “You have no problem wearing them at the Klan rally, wear them to Walmart too,” he remarked. “We’re trying to move forward, these white n—– holding us back. Don’t want to wear your mask? Try wearing the mask I’ve been wearing all these years. I can’t even tell something true unless it has a punchline behind it.”

Addressing Trump directly, Chappelle referred to him as a “racist, hilarious son of a bitch” and gave him credit for calling coronavirus the “Kung Flu.” “I’m supposed to say that, not you!” Chappelle proclaimed.

“Donald Trump’s a wild guy,” Chappelle continued, going on to discuss his response to COVID. “How about some bleach? Some bleach directly in our body. Oh boy, the Secret Service is going to have to childproof the White House now … ‘Mr. President, don’t touch that stove, it’s hot; turn those scissors around, Mr. President, if you’re going to run around the house.”

“And you know what Trump did after all that stuff?” Chappelle commented. “[He] went out and got the coronavirus. Wasn’t that something? You know, when he got coronavirus, they said everything about it on the news. You know what they didn’t say? That it was hilarious. Trump getting coronavirus was like when Freddie Mercury got AIDS. Nobody was like, well, how did he get it?”

He also skewered Trump for letting his friends and close allies suffer, and even die from COVID while he himself received the best care available. “Think about that! For four years, that’s your leader. What kind of man does that? What kind of man makes sure he’s OK while his friends fight for their lives and die? A white man. And I don’t mean to put this on the whites, but I’ve been Black a long time and I’ve noticed a pattern.”

But to close his monologue, Chappelle turned his focus back to the election and the partisanship divide that continues to plague America. “I would implore everyone who is celebrating today to remember it’s good to be a humble winner. Remember when I was here four years ago, how bad that felt? Remember that half the country right now still feels that way. Please remember that” he pleaded.