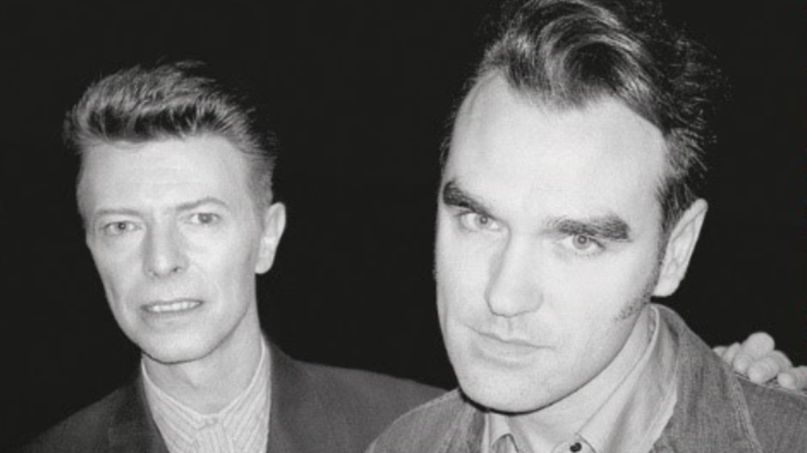 Nearly three decades after it was performed, David Bowie and Morrissey’s live cover of T. Rex’s “Cosmic Dancer” has finally been given an official release.

The recording comes from Morrissey’s June 2nd, 1991 concert at Los Angeles’ Forum. During the encore, Morrissey began singing “Cosmic Dancer” by himself, when suddenly from the darkness at the back of the stage came a second voice. To the crowd’s surprise and delight, out walked Bowie to duet on the classic Electric Warrior cut.

While the performance has circulated online for years, this marks the first time it’s received an official digital release. It will also arrive as a double A-side 7-inch single on February 19th, 2021, backed by a new version of Moz’s cover of The Jam’s “That’s Entertainment”. Morrissey recorded this take earlier this year, making it different from the widely known version from the ’90s.

There’s good reason it’s taken so long for “Cosmic Dancer” to see release. Moz and Bowie were close in the early ’90s, to the point where the latter invited the former on tour in 1995. However, Morrissey was piqued at being dubbed the tour’s “special guest” and not given a proper encore. (Bowie instead would come out for the last song of Morrissey’s set, and the concert would transition from there.) Moz ended up abandoning the tour after only nine shows, leaving Bowie without an opener, and their relationship permanently tarnished.

In fact, Bowie blocked Morrissey from using a photo of them together as the cover art for a 2013 reissue of “The Last of the Famous International Playboys”. That image was taken by Linder Sterling, the photographer behind this new “Cosmic Dancer” artwork. It’s not explicitly known if the “Cosmic Dancer” picture is the same one Bowie blocked from “International Playboys”, but given Morrissey’s temperamental history, would anyone really be surprised?

Stream David Bowie and Morrissey’s “Cosmic Dancer” cover below. Update: A remastered video of their 1991 performance has also been shared.

The release comes just a week after T. Rex’s induction into the Rock and Roll Hall of Fame. It also follows Morrissey’s latest album, I Am Not a Dog on a Chain from March.