Dee Snider and Lzzy Hale Team Up for Powerhouse Rendition of “The Magic of Christmas Day”: Stream 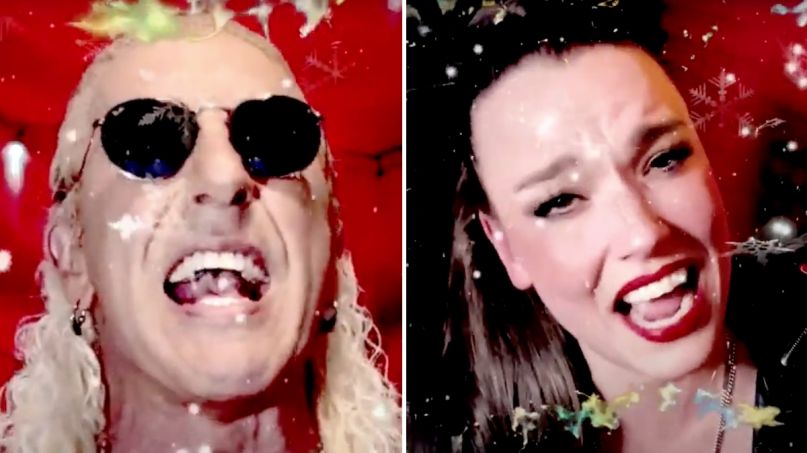 Dee Snider and Lzzy Hale, via "The Magic of Christmas Day" video

What started out as a personal Christmas song that Dee Snider wrote for his wife ended up as a track on Celine Dion’s mega-selling 1998 holiday album, These Are Special Times. Now, the Twisted Sister frontman has finally recorded “The Magic of Christmas Day (God Bless Us Everyone)” himself, with the help of Halestorm singer Lzzy Hale.

As Snider explains, he never meant for the song to be released to the public, simply penning the tune as a holiday gift to his wife, Suzette. But the song became a financial windfall for him after Celine Dion recorded it for her aforementioned holiday LP, which has sold roughly 14 million copies worldwide.

In a press release, Snider stated, “Originally written and recorded as a Christmas gift for my wife Suzette with no plan for commercial release, years later ‘The Magic of Christmas Day (God Bless Us Everyone)’ was discovered and recorded by Celine Dion for her holiday record These Are Special Times, which went on to become the biggest selling holiday album in history — and is the reason we refer to her as ‘Saint Celine’ in my house.”

He added, “When it was recently suggested that I should finally record this song myself, I knew I needed to bring in a young powerhouse vocalist to not only duet with me, but light a Yuletide fire under my ass! I only knew of one rock vocalist who could deliver on all those fronts, and she did in spades: the incredible Lzzy Hale of Halestorm!”

Hale chimed in, “If you’re ever in your life gonna go full on, all gas, no brakes ‘Christmas Cheer,’ you do it Dee Snider-style. I was so honored to get the call from Dee on his holiday classic ‘The Magic of Christmas Day.’ After exchanging a few very affectionate ‘f@&k yous’ as we rediscovered our respect and admiration for each other’s talent, the final recording produced by the legendary Jeff Pilson is insanely epic.”

She continued, “Thank you so much to everyone for having me. And considering we will ALL be experiencing a very different holiday season in 2020, I hope that this song brings you joy and puts a smile on your face. God bless us everyone!”

The track features two of rock’s powerhouse vocalists trading verses and teaming up for a rousing chorus, adding a heavy element while maintaining a festive vibe throughout.

Meanwhile, Lzzy recently joined forces with Lamb of God guitarist Mark Morton on a new quarantine rendition of The Black Crowes’ “She Talks to Angels”. The pair had previously teamed up on the song for Morton’s solo EP, Ether, which was released earlier this year.

Watch Dee Snider and Lzzy Hale team up on “The Magic of Christmas Day (God Bless Us Everyone)” below, followed by Lzzy and Mark Morton performing “She Talks to Angels”. Pick up the Christmas duet here, and Mark Morton’s Ether EP here.