Diane Keaton: Watching Recut Godfather: Part III Was “One of the Best Moments of My Life”

"I saw the movie in a completely different light" 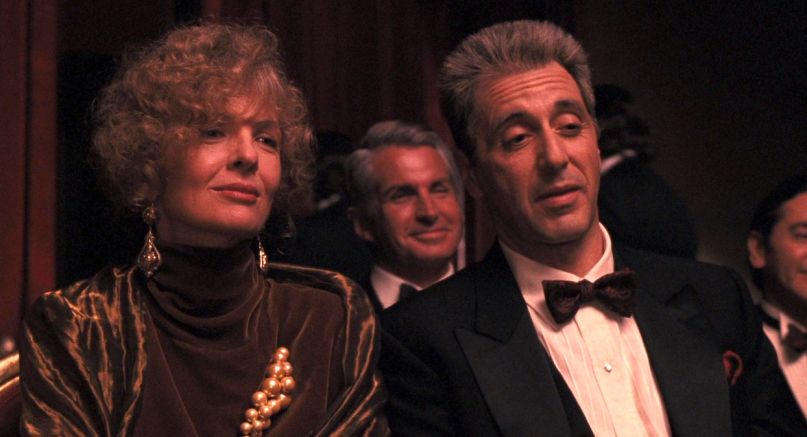 Next month brings the release of Francis Ford Coppola’s recut of The Godfather: Part III, now titled Mario Puzo’s The Godfather, Coda: The Death of Michael Corleone. The famed director has already finished the edit, and even screened it for a number of the film’s stars. As far as first reviews go, Diane Keaton’s couldn’t be more glowing, as she called watching the new version easily “one of the best moments of my life.”

December 20th marks the 30th anniversary of the third installment of The Godfather series, a movie that was less than favorably received by critics and moviegoers upon release. To honor the pearl jubilee, Coppola decided to tinker with the film to highlight previously overlooked parts and give “a more appropriate conclusion” to the beloved trilogy. He reordered scenes, swapped music cues, and glued a new beginning and ending to the three-hour-long flick. Once finished, Coppola did what anyone proud of their work would do: invite Keaton to watch it alongside co-stars Al Pacino, Talia Shire, and George Hamilton at a private screening on the Paramount lot.

“To me it was a dream come true,” Keaton told Variety. “I saw the movie in a completely different light. When I saw it way back, it was like ‘Oh, I don’t know.’ It didn’t seem to do that well and the reviews weren’t great. But Francis restructured the beginning and the end and man, I’m telling you it worked.”

“I don’t know why people didn’t appreciate it [at the time], but I was one of them,” she continued. “What was wrong with me? Why didn’t I like this before? But I didn’t. I kind of just dismissed it and thought, ‘Oh, well.'”

Apparently, it’s not just the plot that was cast in a new light, but the performances as well. In the original sequel, Sofia Coppola starred as Michael Corleone’s daughter, Mary, after Winona Ryder suddenly stepped down due to health issues. The director’s daughter was ripped to pieces in reviews of her performance, with many labeling it as cold, unprofessional, and nepotistic. In the new version, however, Keaton said that the future filmmaker comes off as having delivered a rather remarkable acting job.

“That’s not going to happen anymore,” she said of the past criticisms. “[Sofia Coppola] is what a daughter would be like if you had this guy as your dad, the head of a criminal organization. She was not so sure of herself and is kind of quiet. Kind of haunted. I thought she was fantastic.”

Mario Puzo’s The Godfather, Coda: The Death of Michael Corleone will screen in select theaters on December 4th before receiving a physical home release on December 8th. Order your copy here.

There’s even more Godfather coming to please mob movie fans in the future. Barry Levinson is directing Francis and the Godfather, a new feature film about the making of The Godfather starring Oscar Isaac as the filmmaker and Jake Gyllenhaal as producer Robert Evans.