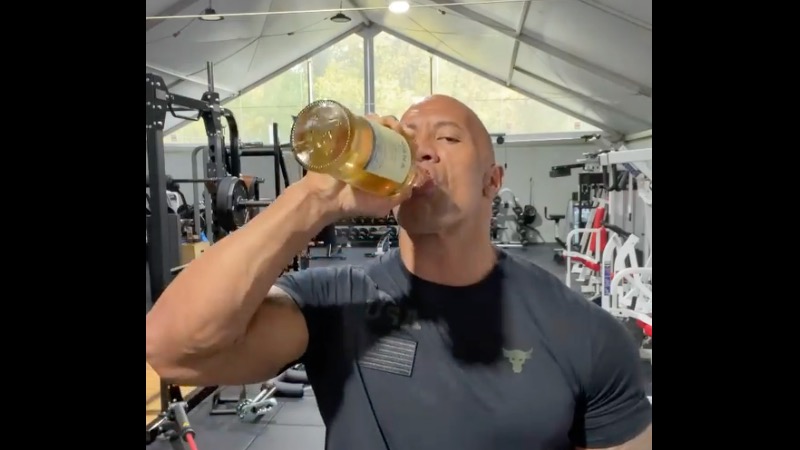 Dwayne Johnson celebrates the 2020 election with some tequila

For four years, Donald Trump equated empathy with weakness, called people who were suffering “losers,” and played “Macho Man” at campaign rallies. Now Dwayne “The Rock” Johnson is modeling a different kind of manliness, happily telling his followers that he “cried a tear or two — or ten” celebrating the Biden-Harris victory.

A self-described “political independent and centrist,” Johnson shocked some of his fans with a September endorsement of Joe Biden. Then yesterday, November 8th, The Rock shared an Instagram video revealing the depth of his support. He said he, “got a little emotional,” hearing the race had been called for Biden, adding,

Admittedly, his joke about “manly tears” has roots in toxic ideas of masculinity. But at its core, Johnson’s message emphasizes empathy and normalizes healthy expressions of male emotion. Besides, if there’s one lesson we can take from the campaign of Joe Biden, it’s that awkward allies are better than no allies at all.

Elsewhere in the video, Johnson spoke about what Kamala Harris’ election meant to him as a man of color, why he felt compelled to speak out against Trump, and his hope that Republicans and Democrats will find unity and common ground. Addressing his fans who may have voted for Trump, Johnson said, “I acknowledge your disappointment; I acknowledge your pain. We’ve all been there. We have fought for things we’ve believed in with our heart and our passion and our guts, and we lose. It doesn’t feel good and I want you to know that I’m still here.”

“And I’m not turning my back on you just because we have a difference of opinion, just because you voted for somebody else,” he continued. “No, I’m still right here. And I’m still right here for you. We’ve still got this relationship and I’m going to make sure that I continue to do everything that I can possibly do to make sure that we’re all working together as a unified front. Unity.”

To that point, Johnson ended his video by toasting everyone who voted — regardless of their political affiliation — and took a giant swig of tequila. Check out the clip below.

Earlier this year, Johnson and his family tested positive for the novel coronavirus, though everyone seems to have made a full recovery. Over the summer, he bought the bankrupt XFL from Vince McMahon.

My vote represented my little girls. It also represented/ Humanity Decency Principles and values @laurenhashianofficial and I instill in our little daughters. And finally, my vote represented the importance of just being a decent human being. And to me, being a decent human being matters. This win feels so good, but now the real work begins. Because we have an entire country divided. I’m not turning my back on you just because we have a difference of opinion. Im not made that way. I’m still right here and when the sun comes up, we all get up with it – go to work, feed our families and pay our bills. Congratulations to President elect @joebiden and Vice President elect @kamalaharris and to all our American people for engaging in the biggest voter turnout our country has ever seen 👏🏾👊🏾 Stand tall, lay it all on the line and cheers to UNITY and finding common ground. Let’s get to work. DJ 🥃🇺🇸