His son Wolfgang also confirms that Van Halen are finished, but there's material in the vault 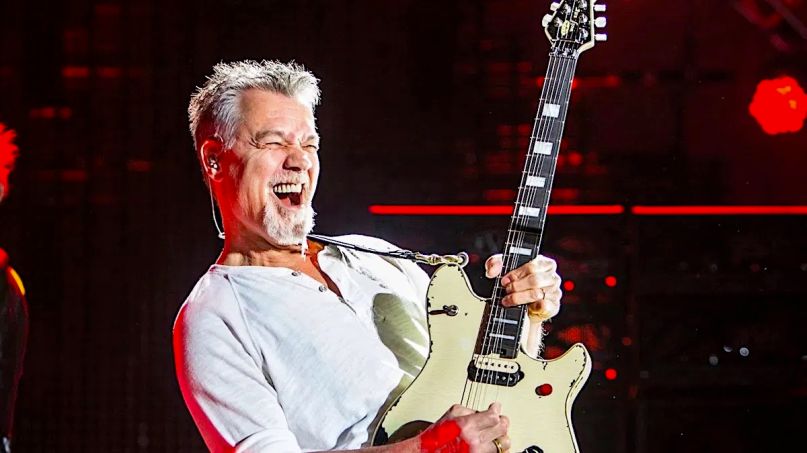 Rumors of a major Van Halen tour began in late 2018 when it was reported that Anthony would be rejoining the band for a massive 2019 stadium trek. The bassist confirmed that he was indeed contacted but that the “plug got pulled” before any serious talks happened. Following Eddie Van Halen’s passing in early October, Van Halen manager Irving Azoff confirmed that the tour was in the works, but that the guitarist was “physically unable to do it.”

While promoting his debut solo single, Wolfgang divulged to Howard Stern that he and Eddie had even bigger plans for the stadium outing, calling it a “kitchen-sink tour.” In addition to Anthony, the jaunt would’ve included Roth, Hagar, and Cherone taking turns singing songs from each of their eras in the band. As part of the plan, Wolfgang would’ve stepped out of his role as Van Halen’s bassist to allow for Anthony’s return, and would’ve opened for Van Halen with his solo project.

“That was real, and we were so excited about it, all of us,” remarked Wolfgang. “It just didn’t pan out, unfortunately. It would have been insane.”

As for reports that Van Halen might continue with Wolfgang on guitar, the younger Van Halen told Stern, “That’s f**king stupid — you can’t have Van Halen without Eddie Van Halen. And I’m not my dad. I’m not going to replace him. I’ve spent my life making sure I’m not like him. I’m my own person.”

He continued, “I think the fans can try and come to terms with and figure out how to deal with the fact that we’re not going to have Van Halen anymore. The music is going to live on forever, but you can’t continue without Eddie Van Halen.”

Another interesting bit of information to come out of the conversation was that Eddie left “a shit-ton of tapes” of unreleased material that “will take a very long time to go through.”

“I can’t put a timeline on it — not in the immediate future would we be going through it,” Wolfgang said of when fans may hear any unreleased music. “It’d be a little shameless to do it right now. It’d be milking Dad and everything, with ideas that probably aren’t out there for good reason. You put out the good shit.” That said, Wolfgang did say he’s “sure there’s some amazing shit in there.”

Eddie Van Halen passed away on October 6th after a long battle with cancer. In the weeks since, Sammy Hagar and Michael Anthony paid tribute to him with a performance of “Right Now” for Hagar’s annual birthday bash, and David Lee Roth dedicated the previously unreleased song “Somewhere Over the Rainbow Bar and Grill” to the guitarist.

Watch a clip of Wolfgang Van Halen’s appearance on The Howard Stern Show below.

Those @VanHalen reunion rumors were true. “We were so excited about it, all of us,” @WolfVanHalen told @HowardStern during their exclusive interview on Monday.