"Make sure your guitar covers your balls at all times" 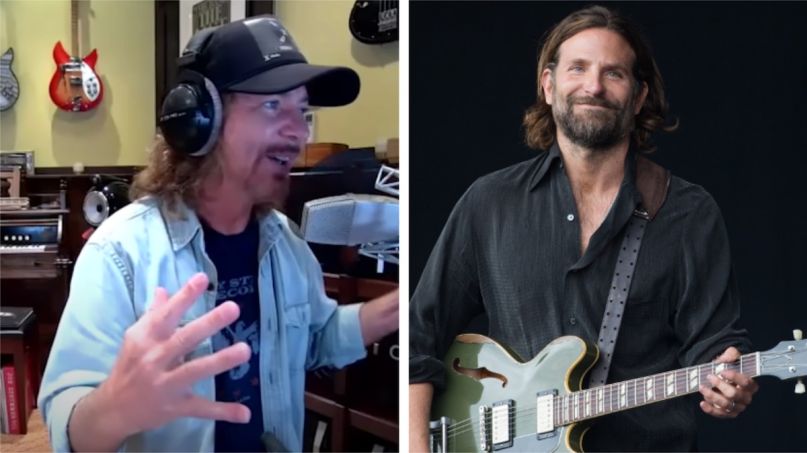 To accurately portray his role as a rock star in A Star Is Born, Bradley Cooper spent a few days shadowing Eddie Vedder to learn the ins and outs of the lifestyle. As part of his tutelage, Vedder provided Cooper with a very important piece of advice.

On Monday, the Pearl Jam frontman recounted his experience working with Cooper on the 2018 flick. He admitted that he was initially hesitant to lend a hand — not because he didn’t trust Cooper to put the proper time and energy into portraying a rock star, but because it’s so rare that a music-focused movie accurately represents the industry as it is in real life.

“We just hung out for a couple of days, and he just asked me a few questions and I told him things like, you know, ‘Make sure your guitar covers your balls at all times,'” said Vedder.

When a visibly surprised Stern asked if that was really all that important, Vedder doubled down, saying, “Well, I think sometimes the guitar gets a little high. It looks more like a bib… That way, if the crowd throws anything, like an orange or tennis ball, you’ll be covered.

Cooper must have taken Vedder’s advice to heart because the final footage used in A Star Is Born ultimately won over the Gigaton singer. “I will admit the first time he asked if we would come down to see it, on the way over, I’m thinking of all the ways I could let him down nicely, you know?” he said. “I want to be honest, but how do I? So I was a little nervous. And I tell you, when I saw it, I was just fucking blown away. It just took me there, and what he can do with his eyes and what [Cooper and Lady Gaga] did together and then Sam Elliott. It really took me there. I’m getting chills right now.”

Watch the full clip below.

Vedder wound up chatting with the veteran broadcaster for three hours, at one point even revealing he “still [hasn’t] quite dealt with” the death of Chris Cornell. Over the years, Vedder has paid homage to Cornell on stage, tweaking his lyrics, covering songs, and sharing stories to fans. Most recently, he joined Cornell’s daughter, Lily, for an interview on her mental health web series.