Set for release next week, the track was written by Morrison and performed by Clapton 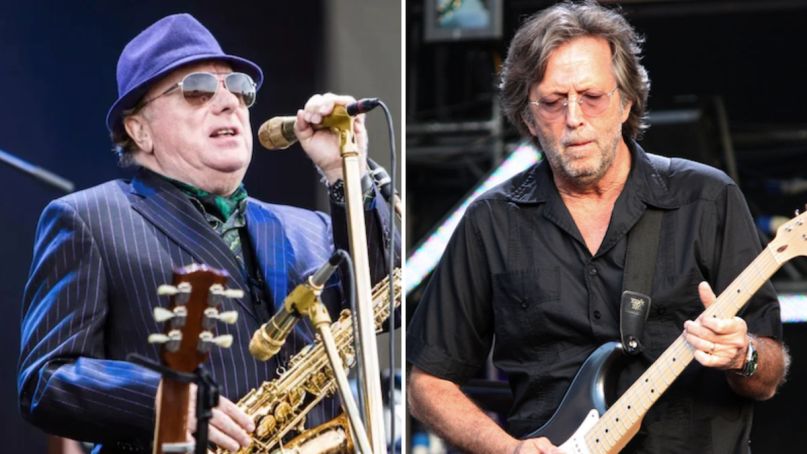 Looks like Van Morrison has pulled Eric Clapton into his suckhole of pseudo-science bull. The legendary musicians have teamed up for a new anti-lockdown protest single called “Stand and Deliver”.

Morrison has been speaking out against the United Kingdom’s COVID-19 restrictions since the summer, particularly as they relate to live music. In September, he launched an anti-lockdown song series that included the tracks “Born to Be Free” and “No More Lockdown”. In spite of the fact that such measures have helped the country start to see a flattening of its infection curve even as one in every 185 people in Morrison’s native Northern Ireland test positive, the Astral Weeks singer apparently hasn’t evolved his thinking — and Clapton is now standing with him.

“There are many of us who support Van and his endeavors to save live music; he is an inspiration,” Clapton said (via Variety). “We must stand up and be counted because we need to find a way out of this mess. The alternative is not worth thinking about. Live music might never recover.”

Clapton performs the Morrison-penned “Stand and Deliver”, which is due out December 4th. Despite its controversial themes, the track does stand to benefit those impacted by the novel coronavirus. Proceeds from the song will benefit Morrison’s Lockdown Financial Hardship Fund, which supports musicians whose income have been impacted by the UK’s lockdown measures.

Said Morrison of the single,

“Eric’s recording is fantastic and will clearly resonate with the many who share our frustrations. It is heart-breaking to see so many talented musicians lack any meaningful support from the government, but we want to reassure them that we are working hard every day to lobby for the return of live music, and to save our industry.”

Of course, the mixed message there is that without strong action against COVID-19, there’s a solid chance live music won’t return in time for summer 2021. Perhaps the focus should be more on drumming up that “meaningful” governmental support rather than putting music fans at risk.

Editor’s Note: During the pandemic, Consequence of Sound is supporting independent musicians by donating a portion of all proceeds from our webstore to independent musicians through the MusiCares’ COVID-19 Artist Relief Fund. Grab yourself a T-Shirt, hoodie, face mask, or even CBD, and support a great cause in the process.